Hepatic lipidosis and hernia are problems that can occur in pet birds due to different causes. Aspergillosis is also an important disease of pet birds. This article reports an interesting case which, to our knowledge, is the first one in Iran. A 7-year-old male common mynah was presented to the clinic of avian diseases at the University of Tehran, Tehran City, Iran, with a history of severe dyspnea, anorexia, feeding with a high-energy diet, and recently been in the northern parts of Iran. Unfortunately, the bird died. Necropsy was done to diagnose the cause of death. Tissue samples from abdominal viscera, lungs, and air sacs were collected and fixed in 10% buffered formalin and stained with hematoxylin and eosin. Bacterial cultures from the liver and bone marrow were performed on blood and MacConkey agars. In the external carcass examination, the abdominal swelling, hernia, and yellow discoloration under the skin were obvious. At necropsy, the liver was enlarged with yellowish discoloration. There was also a high amount of fat around the abdominal viscera. Microscopically, fatty change, hepatocellular necrosis, and hemorrhages were seen in the liver. There were also vegetative forms of Aspergillus on the lung’s parenchyma and air sacs. No bacterial growth was observed. Pet birds are usually restricted to a cage by minimal contact with other birds; thus, diseases related to management are common among these birds. So keeping in suitable conditions with an appropriate, balanced diet is important for their health.

1. Introduction
A 7-year-old male common mynah was presented to the clinic of avian diseases at the University of Tehran, Tehran City, Iran, with severe signs of dyspnea. The owner had not noticed the onset of dyspnea, and his main complaint was an enlargement in the abdominal area. Based on the owner’s information, the bird was fed a high-energy diet (Broiler Finisher diet, Pars Animal and Poultry Feed Ltd, Iran). There was also a history of travel to the northern parts of Iran 6 days before the presentation. The bird was off-feed for 2 days, and its droppings were watery green. There was also no history of drug use by the owner.
Clinical presentation
The bird was perch-off and had severe dyspnea with open-mouth breathing and tail bobbing. The wings were dropped, and an obvious hernia and enlargement were seen in the abdominal area (Figure 1a). The yellow discoloration was present beneath the skin of the area, which was an obstacle to the observation of abdominal viscera. Radiography and ultrasonography were proposed to the owner as an aid for diagnosis. Due to the emergency condition of the bird, we first decided to nebulize it with aminophylline, but before any intervention, the bird died after seizure-like movement. After death, the bird was weighed, and its weight was 126g. 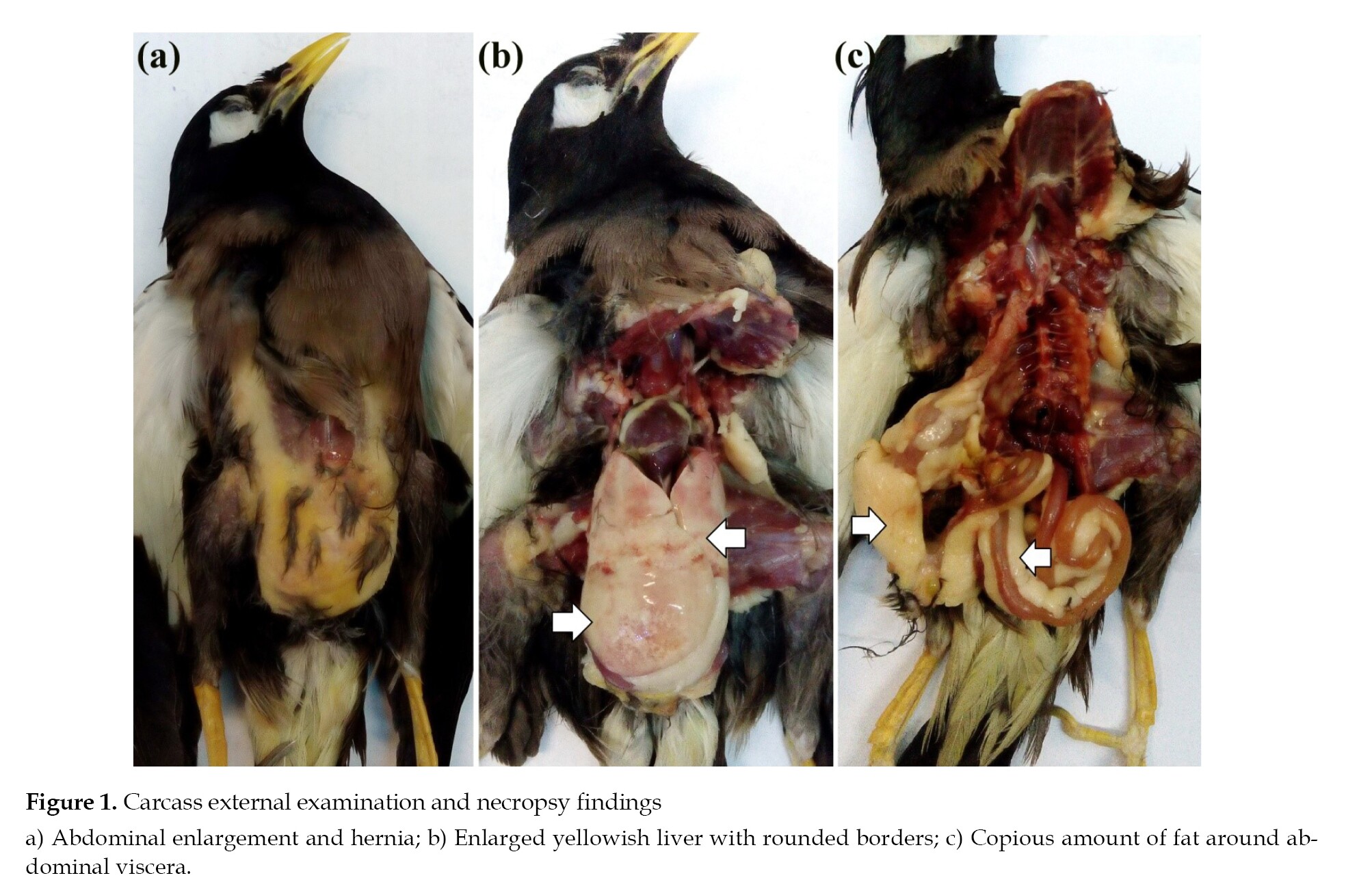 The cage of the bird was also unsuitable. It was small, and the feeder had much feed. The cage floor was dirty and unsanitary, and the perch was made of plastic.
Diagnostic testing
Necropsy was done to diagnose the cause of death. The liver was enlarged with round borders and yellow discoloration (Figure 1b). There were copious amounts of fat around the intestine, proventriculus, gizzard, and some parts of the lungs and kidneys (Figure 1c).
Tissue samples of the liver, duodenum, proventriculus, gizzard, lung, air sacs, and kidneys were taken for histopathology. The samples were fixed in 10% neutral buffered formalin and routinely processed, dehydrated, embedded in paraffin wax, sectioned at 5 μm in thickness, and stained with hematoxylin and eosin.
Microscopically, fatty change, hepatocellular necrosis, and hemorrhages were seen in the liver. The fatty change was characterized by numerous small to large intracytoplasmic vacuoles distorting the hepatic cords. Fatty changes were also observed in the kidneys. A massive development of the vegetative forms of the fungus, containing a large number of conidiophores, hyphae, and spores, was observed in the lung’s parenchyma and air sacs in H&E staining (Figure 2a & 2b). Cultures from the liver and bone marrow were also performed on blood and MacConkey agar, but there was no bacterial growth.

There are some characteristics in avian species that predispose them to the disease. For example, the unique anatomy of the respiratory tract and higher body temperature accelerates fungal growth. Other factors include vitamin deficiency, especially vitamin A, chronic stress, overcrowding, unsanitary condition, malnutrition, treatment with corticosteroids, and respiratory irritants (Nardoni et al., 2006; Leishangthem et al., 2015; Krautwaldjunghanns et al., 2015).
The disease can be acute or chronic. The acute form is common in chicks and results from inhaling many spores. It can develop in less than a week. Clinical signs of this form are not specific and can be confusing. Dyspnea, cyanosis, anorexia, polydipsia, and fetid diarrhea are some of the probable clinical signs (Leishangthem et al., 2015; Fischer and Lierz, 2015).
The chronic form is more common in older birds and takes weeks or months to develop. Clinical signs may vary depending on the site of infection. Different references have reported different clinical signs in the respiratory system, skin, eyes, GI tract, nervous system, bones, joints, and abdominal viscera (Leishangthem et al., 2015; Fischer and Lierz, 2015).
Diagnosis of the disease in live birds is very difficult, especially in acute cases (Leishangthem et al., 2015). Some diagnostic tests like biochemistry, hematology, endoscopy, and imaging can be helpful (Fischer and Lierz, 2015; Savelieff et al., 2018). Definitive diagnosis is based on histopathology from post-mortem samples or biopsy (Elad and Segal, 2018; Leishangthem et al., 2015). Fungal culture from suspected organs can also be helpful (Savelieff et al., 2018). Other diagnostic tools like ELISA and agar gel immunodiffusion are not common and should never be used alone (Fischer and Lierz, 2015). Treatment with antifungal drugs is complex and depends on the site and extent of infection (Leishangthem et al., 2015).
In Iran, keeping birds as pets (mainly from psittacines and passerines) has increased recently. All domestic birds do not have the same nutritional and management requirements. Unfortunately, most of the owners are not familiar with these needs. Thus, malnutrition and mismanagement are characteristic findings in most cases presented to avian clinics.

In this case, according to the history and clinical signs, it seems that hepatic lipidosis is a result of feeding with a high-energy broiler diet and less activity due to the small size of the cage. Feeding mynah with broiler pellets is usual in Iran because it is similar to mynah’s pelleted feed. There is another report of hepatic lipidosis associated with high-energy feed in Iran (Madani et al., 2012).
As described earlier, hepatic lipidosis can make birds prone to hernias. There is a report in a red lory that supports their association (Langlois and Jones, 2001). In this case, the most probable cause of hernia is hepatic lipidosis. This condition causes liver enlargement, which puts the respiratory tract under pressure. This pressure can lead to lower respiratory capacity.
A damp climate, common in northern parts of Iran in summer, encourages fungal growth. The acute form of aspergillosis in birds results from inhaling a high number of spores (Leishangthem et al., 2015). Because the bird had been to the northern part of Iran, its exposure to high numbers of fungal spores may lead to acute aspergillosis. This disease has exacerbated the effect of hepatic enlargement on the respiratory tract. This finding can elucidate the cause of death and premortem clinical signs.
There is no published report of simultaneous hepatic lipidosis, hernia, and aspergillosis in any domestic bird in Iran. Because avian medicine is a relatively new field in Iran and the world, reporting these cases could help develop this field (Pollock et al., 2016). It can also help avian veterinarians and owners to promote their knowledge of captive animal management and potential diseases of domestic birds, which are rare in wild bird populations.
Ethical Considerations
Compliance with ethical guidelines
All procedures were conducted according to the animal care guideline of the Research Committee of the Faculty of Veterinary Medicine, University of Tehran.
Funding
This research did not receive any grant from funding agencies in the public, commercial, or non-profit sectors.
Authors' contributions
Methodology: Peighambari, Shokrpoor, and Razmyar; Writing–original draft and Writing–review & editing: Khodayari and Asghari Baghkheirati; Shokrpoo, Peighambari, and Razmyar.
Conflict of interest
The authors declared no conflict of interest.
Acknowledgments
The authors greatfully appreciate Azam Yazdani and Fattaneh Naderinejad for their technical assistance in bacteriology culture.