BACKGROUND: Neuropathic pain is a chronic condition which is mediated by complex mechanisms exerted by the release of nerve neurotransmitter. A correlation exists between the sex hormones and neuropathic pain, however many aspects of this correlation still remain unclear.

OBJECTIVES: The aim of the current study was to determine the anti-nociceptive activity of testosterone and its interaction with the opioidergic, GABAergic, and dopaminergic receptors in sciatic nerve-ligated male rats.

METHODS: In this study, 170 adult male rats were randomly allocated into the 4 experimental groups following the sciatic nerve ligation. In the experimental group 1, the animals were injected intraperitoneally (i.p.) with saline, testosterone (10 and 15 mg/kg), and morphine (5 mg/kg), and 30 minutes later with formalin into the plantar surface of the right paw. In the experimental group 2, the animals were injected with saline, testosterone (15 mg/kg), nalox-one (2 mg/kg), and testosterone (15 mg/kg)+naloxone (2 mg/kg). In the groups 3 and 4, flumazenil (5 mg/kg) and yohimbine (2 mg/kg) were injected instead of naloxone. Then, the time spent for paw licking was monitored for the first and second phases after the formalin injection.

CONCLUSIONS: These results suggested testosterone has an anti-nociceptive activity and this effect is mediated by the opioidergic, GABAergic, and dopaminergic receptors in the sciatic nerve-ligated male rat.

Neuropathic pain is a chronic condition that can happen at the peripheral and central nervous systems (Migita et al., 2018). Its symptoms include an unpleasant sensation of burning or tin­gling, increased sensitivity to the noxious stimuli (hyperalgesia), and pain due to tissue damages or infections (allodynia) (Vahdati Hassani et al., 2015). Numerous factors such as tissue damages, injury, or infections are associated with neuropathic syndromes (Trevisan et al., 2016). Following the nerve injury, the activation and production of pro- and anti-inflammatory cytokines lead to the activation of the injured nerve and spinal cord which contribute to the peripheral and central sensitization (Xu et al., 2018). A prolonged condition may lead to a serious disability in walking and even hinder the quality of life. Experimental sciatic nerve injury and ligature are useful techniques to determine the pathophysiology of neuropathic pain (Sumizono et al., 2018). The appropriate management of neuropathic pain should be considered since pharmacological treatments have a positive effect in half of the patients afflicted with this problem (Tsuda, 2016).

Growing evidence on sex differences and the anti-nociceptive activity of the opioidergic system in non-human primates and rodents has demonstrated that males are more sensitive than females (Khakpay and Khakpai, 2020). Observed differences are related to hormonal, physiological, psychological, neuro-immunological, and sociocultural factors (Nasser and Afify, 2019). There is information about the anti-nociceptive role of testosterone in males, where gonadectomy leads to a decrease in morphine-induced nociception (Beshkani et al., 2017). Testosterone plays an analgesic role in temporomandibular joint pain/damage in male rats (Sharma et al., 2019). It was reported that clonidine (α2 adrenoceptor agonist) alone, in a dose-dependent manner, reduced the nociceptive responses in both the first and second phases in a mouse orofacial formalin model (Yoon et al., 2015). Moreover, the α2-adrenoceptor-induced anti-nociception in the trigeminal area was mediated by testosterone in a male rat (Nag and Mokha, 2016). The anti-nociceptive effects of clonidine and orphanin/FQ were mediated by testosterone in the spinal cord (Nag and Mokha, 2009). Furthermore, higher levels of testosterone propionate (1 mg/kg for 7 days) decreased the temporomandibular joint-induced pain using formalin in the male rats (Fischer et al., 2007).

Recent studies have identified a role for the central and spinal γ-aminobutyric acid (GABA) receptors in pain modulation (Witkin et al., 2019; Ness et al., 2020). The spinal GABAA receptors have an important role in the management of inflammatory and neuropathic pains (Bravo-Hernández et al., 2016). Despite the fact that the anti-nociceptive activity of testosterone has been well documented, its analgesic activity in sciatic nerve injury remains unclear. Additionally, its neurological connection to the central nervous system (CNS) has been investigated in several types of research (Yoon et al., 2015; Nag and Mokha, 2016), however, limited information exists on its role in the peripheral nervous system (PNS). Therefore, the primary aim of the current study was to determine the anti-nociceptive mechanisms of testosterone in the sciatic nerve-ligated male rat. The secondary purpose was to determine its interaction with the opioidergic, GABAergic, and dopaminergic (DAergic) receptors in the sciatic nerve-ligated male rat.

Data was analyzed by the one-way analysis of variance using the SPSS software version 18.0 (PASW Statistics for Windows, Version 18.0. Chicago: SPSS Inc.) and presented as mean ± standard error (SE). The Tukey post-hoc test was also used for the differences between the groups. P-value <0.05 was considered to indicate a significant difference. 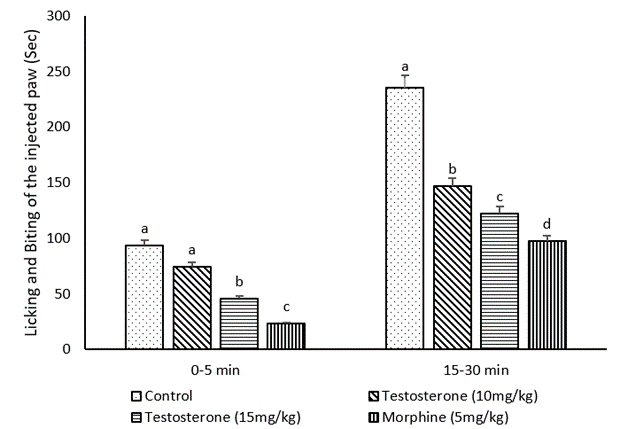 In experimental group 2, naloxone (2 mg/kg, i.p.) had no significant effect on the time of licking and biting in comparison to the control group (P>0.05). This is while testosterone (15 mg/kg, i.p.) significantly decreased the time of licking and biting compared to the control group (P<0.05). Moreover, pre-treatment with the opioid receptor antagonist significantly decreased the anti-nociceptive effect of testosterone compared to the group injected with testosterone alone (P<0.05) (Figure 2). 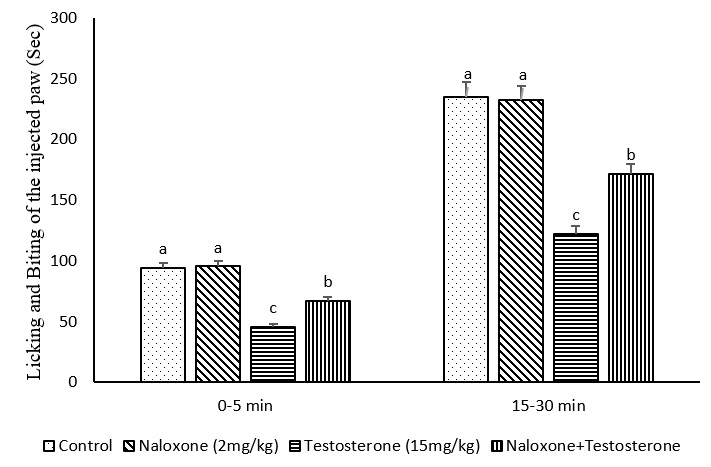 Regarding experimental group 3, flumazenil (5 mg/kg, i.p.) had no significant effect on the time of licking and biting in comparison to the control group (P>0.05). While testosterone (15 mg/kg, i.p.) significantly reduced the time of licking and biting compared to the control group (P<0.05). Similar to the previous group, the pre-treatment with the selective GABAA antagonist significantly diminished the anti-nociceptive effect of testosterone compared to the solely testosterone-injected group (P<0.05) (Figure 3). 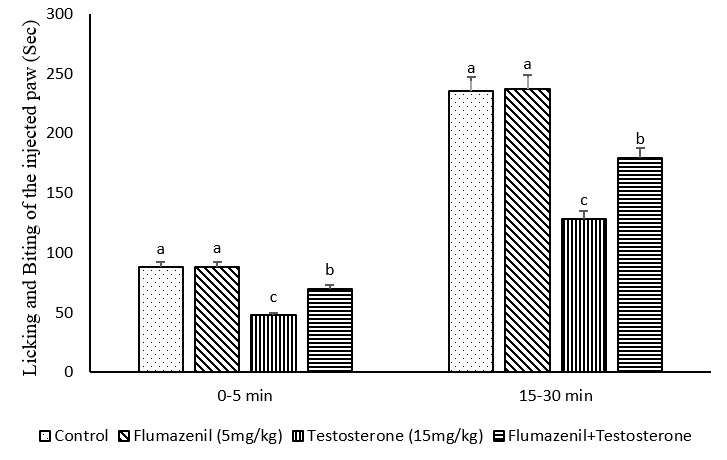 Considering the experimental group 4, yohimbine (2 mg/kg, i.p.) had no significant effect on the time of licking and biting in comparison to the control group (P>0.05). While testosterone (15 mg/kg, i.p.) significantly reduced the time of licking and biting compared to the control group (P<0.05). despite the previous two groups, the pre-treatment with the α-adrenergic receptor antagonist (yohimbine) significantly improved the anti-nociceptive effect of testosterone compared to the group injected with testosterone alone (P<0.05) (Figure 4). 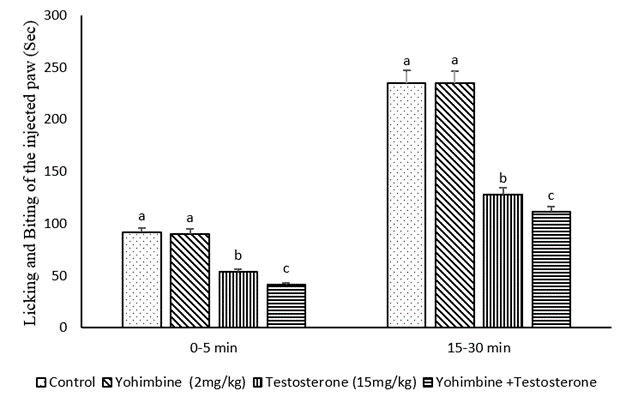 The central and peripheral mechanisms of neuropathic pain consist of the changes in the ion channel expression and nerve neurotransmitter re­lease (Trevisan et al., 2016). Pain acts via several chemical mediators released during this process and leads to nociceptive sensitization. The mechanism underlying the formalin-induced pain behavior involves a series of events including peripheral and central biphasic responses (Shi et al., 2011). Acute pain serves as a warning system that signals imminent tissue damage. Whereas chronic pain has no protective role and persists for a long time after injury without reflecting a definite lesion or disease (Labuz et al., 2016). The formalin test is a reliable and sensitive behavioral biphasic model of nociception (Vahdati Hassani et al., 2015) that is used to determine the mechanism of action of testosterone. The rats subjected to the formalin test do not usually display any pain response between the two phases, as observed in the current study. Actually, the interphase is the result of hyperpolarization and transient inactivation by formaldehyde of the surviving neurons (Fischer et al., 2014).

According to the results, the injection of testosterone in a dose dependent manner decreased the time of licking and biting in the injected paw. Moreover, the pre-treatment with naloxone significantly decreased the anti-nociceptive effect of testosterone in the sciatic nerve-ligated male rat. In the present study, 14 days after the unilateral sciatic nerve ligation, hyperalgesia to the thermal stimulation was significantly observed (pilot study for the accuracy of ligation protocol). Testosterone and its metabolites have an anti-nociceptive effect on the inflammation-induced mechanical allodynia. In addition, the replacement of testosterone reversed the inflammation-induced sensitivity in the gonadectomized rat (Nasser and Afify, 2019). Furthermore, the testosterone replacement improved the responses to morphine in the castrated rats (Hosseini et al., 2011). Despite several types of research, the cellular and molecular mechanisms underlying the regulatory activity of testosterone on opioid analgesia remain still unclear (Nasser and Afify, 2019).

The effect of the GABAergic system on neuropathic pain is clear (Zeilhofer et al., 2012). The blockade of spinal GABAA receptors decreases the tonic excitability of primary afferent fibers (Loeza-Alcocer et al., 2013), as well as decreases the inflammatory and neuropathic pain (Bravo-Hernández et al., 2016). The central and spinal GABAA receptors inhibit the basal synaptic transmission and increase the pain thresholds in mice (Xue et al., 2017). However, because of the limitations of the current study, we were not able to determine the interaction of testosterone with specific adrenergic and GABAergic receptors. The nociceptive response in the formalin test was higher in the mice lacking the α5-GABAA receptors (Perez-Sanchez et al., 2017). Furthermore, the GABA receptors play a crucial role in different nuclei of the CNS such as the parabrachial nucleus as a nociceptive relay between the spinal laminas and intralaminar thalamus that mainly project to the prefrontal cortex (Roeder et al., 2014). There is an interaction between testosterone and GABA in the regulation of several physiologic and pathophysiologic conditions. The anxiolytic effects of testosterone are mediated by the GABAA receptors and this effect is blocked by the administration of picrotoxin (a GABAA receptor antagonist) in the female rats (Flores-Ramos et al., 2019).

Exposure to neurosteroids increases the open probability of the GABAA receptor and leads to a Cl- influx and decreases neuronal excitability (Wang et al., 2016). Reddy and Jian (2010) reported that testosterone-derived metabolites such as rostanediol can activate the GABAA and GABAC receptors. Additionally, the GABAC receptors have an interaction with the anxiolytic effect of testosterone. Perhaps the findings of this study also is regulated by these interactions though because of limitations of the current study, we were not able to determine the interaction of testosterone with specific receptors. Hence, further researches are needed to determine the accurate neurologic mechanisms involved in the anti-nociceptive activity of testosterone in unilateral sciatic nerve ligation. The limitations of the current study hampered us to determine the anti-nociceptive activity of the central testosterone and its interconnections with the opioidergic, GABAergic, and DAergic systems.

In conclusion, these results suggested testosterone has an anti-nociceptive activity and this effect is mediated by the opioidergic, GABAergic, and DAergic receptors in the sciatic nerve-ligated male rat.

The authors thank the Faculty of Veterinary Medicine, Science and Research Branch, Tehran, Iran for cooperation. This research is conducted as a part of the DVM thesis of the first author.