BACKGROUND: The ossicles comprise three small bones (malleus, incus, and stapes) known as the smallest bones in the body that play an essential role in transmitting sound to the inner ear.

OBJECTIVES: The study was conducted to compare the structure of the middle ear in native sheep and cattle.

RESULTS: The cow's middle-ear ossicles differed from those of sheep in some details. The results revealed obvi-ous differences in length, width, and thickness of malleus, incus, and stapes in cows compared to sheep. However, further differences were observed in the malleus compared to the other two ossicles when the ossicles of the two species were evaluated. After examining the two studied species, the least difference was observed between the ossicles of the two animals in the stapes.

The performance of hearing is a specific feeling observed among the upper classes of the animal kingdom and is one of the most important sensory inputs to the maintenance of life. It seems very interesting such a small structure like the ear performs a vital act of hearing. There are three small ossicles, called the malleus, incus, and stapes, inside the middle ear (Saha et al., 2017). In the discussion of the middle ear, it has been turned out that it needs to evolve many times; in this way, one ossicle has evolved in primitive birds and reptiles and then in the form of three ossicles in mammals (Tucker, 2017). Wible and Gaudin (2004) reported a lack of processes for muscular fixation in the middle ear in Euphractus sexcinctus, but they did not show any degree of muscular development (Wible and Gaudin, 2004). The next experiences were developed from the reptilian condition, which then extended to reptiles and birds and the mammalian middle ear (Pfaff et al., 2019).

The mammalian middle ear is the most basic morphological feature that signalizes this class of vertebrates. Middle ear skeletal pattern differs obviously among vertebrates from those of other amniotes and has attracted the attention of comparative zoologists for years (Meng et al., 2020). By revealing the structural components of the middle ear, examination of the bones involved is not out of reach. The middle ear has three ossicles, the malleus, incus, and stapes (Cañestro et al., 2007; Péus et al., 2020). Researchers have shown more terrestrial mammals can be arranged into two basic middle ear types established upon their ossicular morphologies (also seen in fossils); with a range of intermediate or transitional morphology between both types. These groups have malleus with a long process (processus gracilis) fused to the ectotympanic through the gonial, the wide transverse lamina between the manubrium and the articular surface (for the incus), and the prominent bone mass near the base of the manubrium, which is called the orbicular apophysis (Fleischer, 2013; Wang et al., 2019).

Recent genetic analyses on the mouse have provided information about genes central to middle ear formation (Mallo, 2001, 2003; Fritzsch and Elliott, 2017). However, middle ear bones are essential in mammals for increasing the sensory conduction of auditory capacity, the way that they conduct sound from the outer ear to the inner ear (Kerber and Sánchez-Villagra, 2019).

Large middle ear ossicles can relatively improve the functional sensitivity of the sensory cells inside the inner ear vestibule to low frequencies with loose ligament attachments and large tympanic membranes (Jurado and Marquardt, 2020). Therefore, one goal from investigations of auditory genetics and physiology is to express the relationship between the middle ear's structure and the function of the auditory signal process. The purposes of the present study were to morphologically describe the middle ear region with particular emphasis on the auditory ossicles; and to carry out a bio-morphometric comparative study of the middle ear ossicles in the two species, Lori sheep and Native cow.

The study was a biometrical basically sciences-based pragmatic study, performed in the Department of Anatomy in Shahrekord University to monitor the morphological and biometrical differences between ossicles of the middle ear in a period of approximately two months from collecting samples until ossicles separation. A number of cattle and sheep skull bones (in Shahrekord district), each separately and possessing entire ossicular series in the pattern of ‘with no discontinuity’ and ‘without erosion/deterioration’ were selected. Bones that seemed to be worn out in consequence of ear disorders and/or complicated diseases were excluded from this investigation. The proposal was approved by the Ethics Committee of Deputy of Faculty and University of Shahrekord approved this research project. The methods used to get different bones of the ear were similar to the early stages of "the method of the mastoidectomy," which was carried out according to a previous protocol (Mitchell and Coulson, 2017). To expose the malleus, incus, and stapes bones, the tympanic bulla was required to be made accessible using a tiny drill. Afterward, the middle ear ossicles were separated from the tympanic cavity and examined using an anatomical stereomicroscope (Model Olympus Co., Tokyo, Japan). Issues that were considered included; i) description of the anatomical structure of the middle ear ossicles and ii) measurement of the biometric parameters of the middle ear ossicles including weight, thickness, and diameter; comparison of values was made relatively.

Radiographs were established from the middle ear in medial view. The film distance from the X-ray source was about 20 cm and the radiographic device was regulated at 45 kV (KV) and 20 mA/s. An X-ray (Ralco s.r.l Comp) set was used to take a radiograph of the middle ear bones, including malleus, incus, and stapes, on a high-resolution mammography film.

Data of middle ear ossicles were analyzed using the SPSS statistical software package version 23.0.0 for Windows. Data were expressed as mean ±standard deviation (SD), and statistical variations were tested by the Student-T test. The biometric values of variations, including the weight, length, width, and thickness concerning middle ear ossicles were corrected between two species and the method used was considered with the probability of P-value<0.05 as statistically significant. 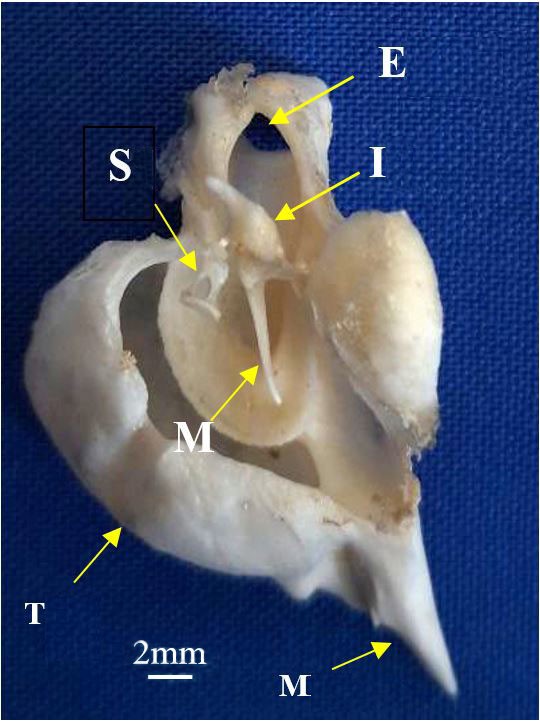 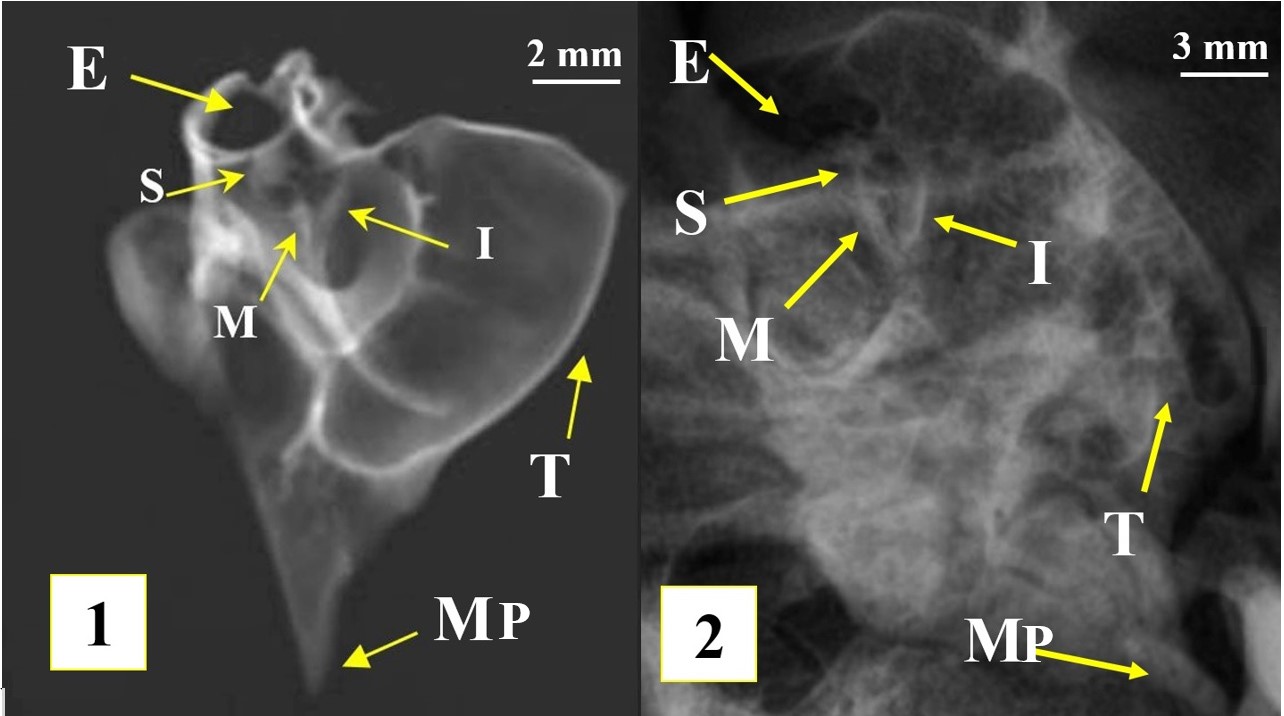 The values of weight, diameter, and length concerning stapes ossicle in every two animals are presented in Table 1. It should be noted that there was a significant difference between the two species regarding the width of the stapes ossicle (P<0.05). Biometric values of thickness, length, and weight were higher in the cow compared to the sheep during the anatomical evaluation of this bone except for the weight, as there was no significant difference between the cow and sheep in terms of weight of stapes ossicle (P>0.05).

Significant differences between each two values of a single parameter compared between two species are shown with same letters; otherwise there is no letter denotation.

Although some researchers have evaluated the skeletal structure of the middle ear from a descriptive point of view (Erdogan and Kilinc, 2010; Padmini and Rao, 2013; Saha et al., 2017; Simaei et al., 2017), no study has fully compared the middle ear bones (malleus, incus, and stapes) between the two species of cattle and sheep. Therefore, the present study comparatively evaluated these bone structures in the mentioned two species. Findings around biometric values of middle ear ossicles showed a signi-ficant difference between the two species (P<0.05). However, no difference was observed regarding the effect of sex on the biometric rate in both animals (data not shown).

The researchers have shown that measuring some of the middle ear ossicles (e.g., stapes) plays an important role in the output impedance of the ear (Grossöhmichen et al., 2017). On the other hand, these effects can have another effective function in synthetic hearing aids; in this way, it replaces some lost parts of the body. In another demographic study in India conducted on the morphometric dimensions of male human ear ossicles, Sodhi et al. (2017) showed that exact measurements of the ossicles could be very helpful in designing the prosthesis in ossicular chain pathology (Sodhi et al., 2017).

As previously identified, reports revealed no significant difference between middle ear bones in male and female rabbits. This may lead to the result that diversity in the characteristics of middle ear ossicles, particularly bio-anatomical parameters, does not matter so much in terms of sex (Kurtul et al., 2003), as our results agreed with the results of this study. Although the findings suggest no gender difference in the structure of the middle ear ossicles (Kurtul et al., 2003), in the current study, the effect of gender factor was considered. In some old and new samples of middle ear bones, differences were observed, as Stoessel et al. (2016) on the morphology of the middle ear ossicle displayed that there was a significant difference between neandertals and anatomically modern humans (Stoessel et al., 2016).

The gross anatomical structure of the malleus, incus, and stapes ossicles in this study were the same as recent reports (Seibel et al., 2006; Gurr et al., 2011; Kuriakose and Sagar, 2014; Péus et al., 2020). Some studies have shown tangible differences, as Kurtul et al. (2003) showed that some middle ear ossicles in rabbits, in anatomical appearance, have an obvious difference with the rest of animals. They found that there was a great variation, especially in the processes and handling in these ossicles (Kurtul et al., 2003).

Regardless of the significant differences between some biometric quantitative values of the middle ear ossicle in this study, the variations indicated a sensible difference in measured values about ossicles of the cattle relative to the sheep. However, with an overview of the "P-value" of the measured number of ossicles, we found that malleus ossicles had the least alteration in both species of cattle and sheep. While in the other two ossicles, namely incus and stapes, the most alteration was observed regarding biometrical measurements. Researches have shown that between the ossicles, the incus is the most fixed ossicle and the stapes ossicle has the most variability as long as their morphological changes are individual and important (Mogra et al., 2014; Noussios et al., 2016; Martonos et al., 2019). Previous studies have shown that congenital ossicle anomalies are accompanied by facial nerve abnormalities. Further-more, Padmini and Rao (2013) in evaluating morphological changes of human fetal ear ossicles showed that impoverished human fetuses could be used in homograft forms to substitute corroded mature ear ossicles (Padmini and Rao, 2013).

The tympanic cavity is surrounded by the tympanic membrane, which in most mammalian species forms a glandular, cartilaginous, or bony structure. The structure of the tympanic membrane differs among mammalian species considering the bony main composition or ingredients that contribute to the structure (Ekdale, 2016). Therefore, it seems that the distinct difference between the bones of the two species under this study is closely linked to the dimensions of tympanic bone. In this respect, as is clear, tympanic bone shows a larger dimension in ruminants (Gurr et al., 2011; Péus et al., 2020). Therefore, it is easier to understand the distinct difference between the measured values in the malleus, incus, and stapes ossicles between two animal species; however, some bony values did not show significant differences.

It could be concluded that anatomical parameters of middle ear ossicles examinations in sheep and cow showed some significant differences in ossicles detail, however, these findings can be useful for future studies.

This work was financially supported by the University of Shahrekord, Iran. In the end, the authors of the paper, from experts in the field of anatomy of the department of basic sciences thanks and appreciates.