Clinical, Radiological and Microscopical Findings of Chondrosarcoma in a Cat

Chondrosarcoma is an uncommon malignant neoplasm in which the neoplastic cells produce chondroid and varying amounts of matrix. This tumor is the second most common primary skeletal tumor in animals. In our case, radio-logical and histopathological findings supported the final diagnosis of chondrosarcoma in a six-year-old male cat weighing 6.3 kg with a large and solitary mass in the right humerus. The shoulder joint had a limited range of motion. Radiographs were obtained from the raised growth. The mass was surgically excised for histopathological evaluation. Microscopically, the mass was composed of bundles and nests of neoplastic mesenchymal cells. Histo-pathologically, multiple-sized lacunae within a homogenous cartilage matrix were observed. There was marked anisocytosis and anisokaryosis. Neoplastic chondrocytes and oval cells with 1 to 3 nucleoli were seen. Based on the macroscopic, radiological, and cartilaginous differentiation of tumor cells and matrix, the mass was diagnosed as well-differentiated chondrosarcoma

Skeletal neoplasia most commonly occurs in the femur and humerus (Ettinger, Feldman, & Cote, 2016; Withrow, Vail, & Page, 2013). Chondrosarcoma is an uncommon malignant neoplasm in which the neoplastic cells produce chondroid and fibrillar matrix (Durham, Popovitch, & Goldschmidt, 2008). This tumor is the most important primary skeletal tumor in veterinary medicine (Nielsen, 1976; Rozeman, Cleton-Jansen, & Hogendoorn, 2006). Chondrosarcomas are usually diagnosed in cats 9 years of age or older, with an average age of 9.6 years. This tumor frequently occurs in males than in females. Feline chondrosarcoma appears to grow slowly and invade locally––but rarely metastasizes (Durham et al., 2008). This paper is about the macroscopic, surgical, radiological, and histopatholo-gical findings of chondrosarcoma in a cat.

In August 2020, a six-year-old male cat weighing 6.3 kg with a large and solitary mass in the right humerus was referred to our clinic. In the clinical examination, the cat was responsive. Its pulse and respiratory rate were normal, and signs of pain on palpation were detected around the affected area. Limited joint mobility in the shoulder joint, especially in flexion mode, was seen. Macroscopically, a firm swelling was observed in the proximal right humerus. The axillary lymph nodes had normal size (Figure 1A). Radiographs of the right hand revealed osseous lytic and proliferative changes of the proximal humerus. The diameter of the mass was about 10 cm. Though radiological findings suggested osteochondroma (Figure 1B).

Analgesia was provided by subcutaneous injection of ketoprofen (2 mg/kg; Razak, Tehran, Iran) once daily for three days. Tissue samples of the mass were fixed in 10% neutral buffered formalin and routinely processed, dehydrated, and embedded in the paraffin wax, sectioned at 5 μm in thickness (Rotary Microtome RM2145, Leica), and stained with hematoxylin and eosin (H&E) stain. The cat recovered uneventfully.

Microscopically, the mass was composed of bundles, nests, and sheets of neoplastic chondrocytes that produced a basophilic cartilage matrix. However, the mass was poorly vascular, and islands of chondrocytes were separated by fibrous connective tissue (Figure 1D). 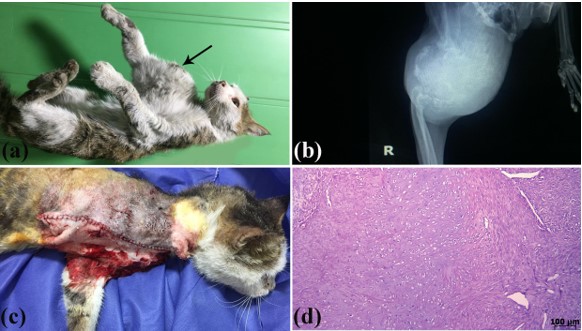 Figure 1. A, the mass on the right humerus (arrow). B, the radiograph of the mass. C, limb amputation. D, histopathological section of chondrosarcoma, the nests, sheets of neoplastic mesenchymal cells, and chondroid matrix, H&E.

The biopsy specimens displayed areas of necrosis (Figure 2A). Microscopic evaluation revealed variably sized lacunae within a fibrillar matrix. Individual neoplastic chondrocytes had distinct cellular borders and abundant eosinophilic cytoplasm. There was marked anisocytosis and anisokaryosis. Pleomorphic cells with 1 to 3 nucleoli were also observed (Figures 2B and 2C). The mitotic figures were less than 1 per high-power field (HPF; Figure 2D). Based on the histopathological findings, the diagnosis of the mass was confirmed as well-differentiated chondrosarcoma. 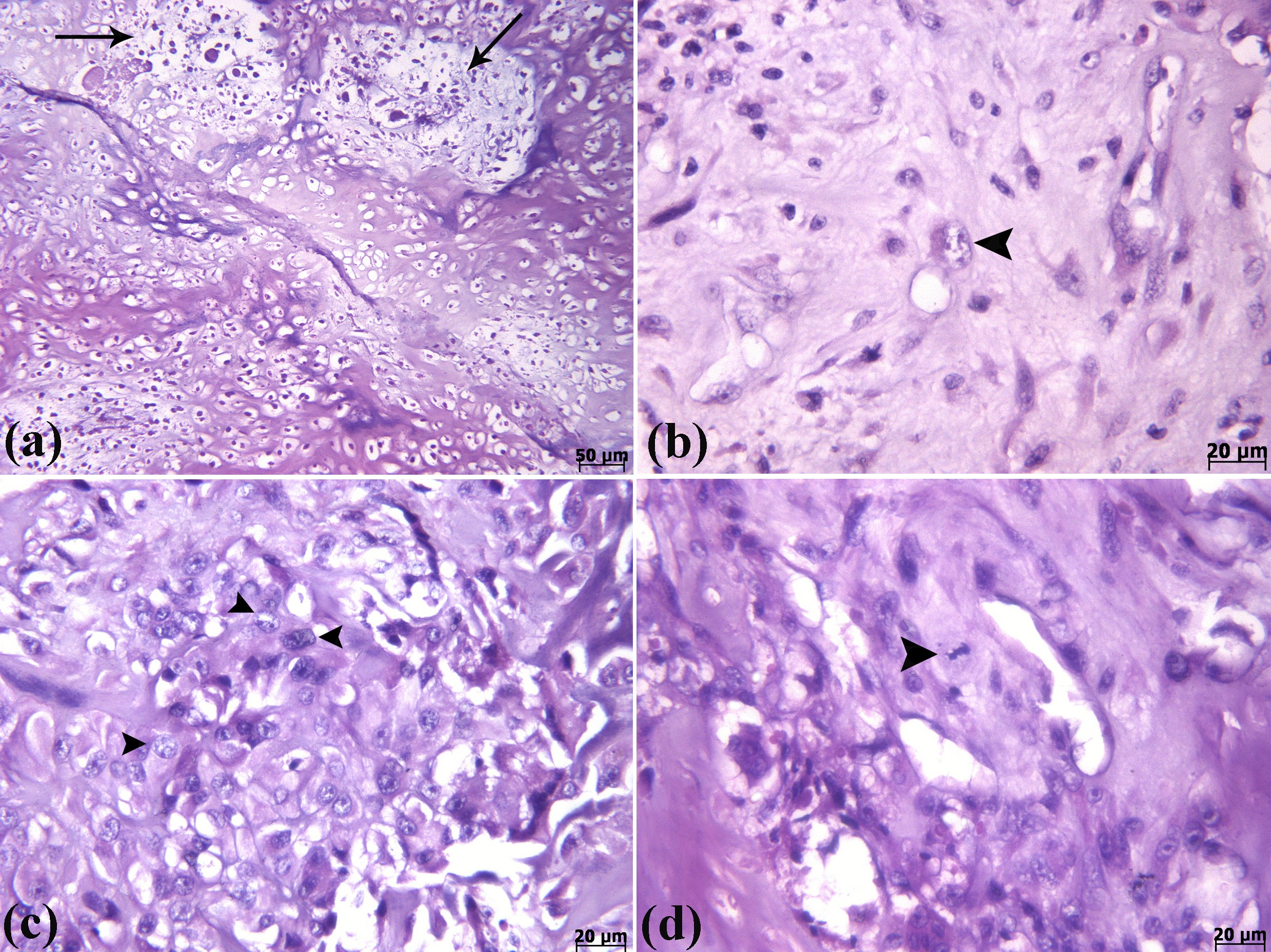 Figure 2. A and B, histopathological sections of chondrosarcoma. A, multifocal necrosis (arrows). B, bizarre neoplastic chondrocytes. C, pleomorphic to oval cells with 1 to 3 nucleoli (arrowheads). D, mitotic figure (arrowhead), H&E.

Skeletal neoplasia is a rare phenomenon in cats. Osteosarcoma is the most common primary malignant bone tumor in this species, while fibrosarcoma and chondrosarcoma are the second and third most common cancers (Withrow, 2007). Chondrosarcoma may originate from the flat and long bones in cats (Merchav, Dank, Aizenberg, & Shahar, 2005). This study is about the presence of chondrosarcoma in a cat. There is only one report about chondrosarcoma in a cat (Merchav et al., 2005). In our case, limb amputation was performed. Although information about other possible therapies except for surgical ones in this case (such as radiation) is still limited, following amputation, the survival time seems to be lengthened (Straw, Withrow, Gillette, & McChes-ney, 1986; Turrel & Pool, 1982). Also, wide surgical excision is a curative therapy for this neoplasm (Durham et al., 2008; FARESE et al., 2009). In cats, metastasis is not very common. As a result, surgical removal is curative (Merchav et al., 2005; Thompson, Pool, & Meuten, 2017).

Lameness and pain on palpation in our case are similar to other cases of chondrosarcoma (Merchav et al., 2005). Microscopically, in chondrosarcoma, there is no osteoid production (Thompson & Ditt-mer, 2017). In the current case, osteoid was not observed, which was in line with the previous report. Similar to the present case, mitotic figures are low in well-differentiated chondrosarcomas (Thompson & Dittmer, 2017). Two months after surgical treatment, neither recurrence nor metastases were detected in our case. In this case, surgical excision was a treatment of choice (Miller Jr, Griffin, & Campbell, 2012; Nakashima, Unni, Shives, Swee, & Dahlin, 1986).

On the basis of the macroscopic and microscopic characteristics, the cause of this neoplasm remained unknown. Limb amputation or wide surgical excision is a curative therapy for this tumor.

Mr. Samani is thanked for assisting with the histopathological sections.

The authors declare that there are no conflicts of interest.