BACKGROUND: Lumpy skin disease virus (LSDV) is a DNA virus from the genus capripoxvirus. Though the morbidity rate of this virus is different among species, it involves all ages. This disease was limited to sub-Saharan Africa though it gradually spread to other African countries and the Middle East.

OBJECTIVES: This study aimed to evaluate and compare the clinical and epidemiologic indices of the virus in two groups of native and Holstein cattle.

METHODS: In this research, 1652 native cattle (group 1) and 1798 Holstein cattle (group 2), which were kept in 32 -unvaccinated epidemiologic units, were studied during the field investigation about the disease in Zanjan prov-ince, at first outbreak of LSD. All major symptoms, lesions, morbidity and mortality rates observed were recorded in pre-designed forms. None of the infected cattle in this study were vaccinated.

CONCLUSIONS: The results of this study showed that native cows are more resistant to LSDV than Holstein cows.

Lumpy skin disease virus (LSDV) is a DNA virus from genus capripoxvirus that belongs to the family Poxviridae. LSDV is also known as Neethling and has an antigenic relationship to sheep pox and goat poxviruses (Babiuk et al., 2009; Sudhakar et al., 2019; Varshovi et al., 2018). Though these three viruses are completely separated, it is hard to differ-entiate them serologically. Though the morbidity rate of this virus is different among species, it involves all ages (Abutarbush et al., 2015; Kitching, 1992; Sprygin et al., 2018; Sprygin et al., 2019). The disease outbreak usually occurs after climate cha-nges, heavy raining, and high activity of insects in the area in late summer and early fall (OIE, 2000). While all the cattle of any age, sex, and breed are affected by this disease, more severe signs are observed in young animals and dairy cattle (Hunter and Wallace, 2001; Sudhakar et al., 2019).

The morbidity, mortality, and case fatality rates of the disease depend on many factors such as immune status of affected cattle and frequency of vectors (Tuppurainen and Oura, 2012). The infection rate has been 1 to 2% but in some areas, it may reach 80 to 90%. The mortality rate has been reported about 10-40%, and even higher in special cases, but the usual rate was 1 to 5% (Coetzer, 2004; Sprygin et al., 2018; Sudhakar et al., 2019). In most cases, the disease is transported by insect vectors like an arthropod, Aedesaegypti mosquito (Al-Saad and Al-Saad, 2020; Chihota et al., 2001; Gupta et al., 2020; Tuppurainen et al., 2015), stomoxyscalcitrans (Sprygin et al., 2019), and hard (ixodid) ticks (Tuppurainen and Oura, 2012). The LSDV is not separated from stomoxys confiscate and muscaconfiscate (Gupta et al., 2020; Issimov et al., 2020). The possible insect vectors of LSD in Iran are Stomoxyscalcitrans, Muscadomestica, flies of Tabanidae family, Anopheles, and culexaedes from Culicidae family (Aleksandr et al., 2020).

Though the cattle can be infected by drinking water, direct contact is not the common way of trans-mitting the disease. However, the virus is present in the nose and eye discharges, semen, and milk of the infected animals (Al-Salihi and Hassan, 2015; Annandale et al., 2014). This disease is hardly trans-mitted by sharing the needles or direct contact (skin lesions, saliva, respiratory secretions, semen, milk) (Sprygin et al., 2019). The incubation period is usually 1 to 4 weeks in field conditions but it is 7 to 14 days in experimental conditions (Al-Salihi and Hassan, 2015; Aleksandr et al., 2020; Coetzer, 2004). The objective of this study was to compare clinical and epidemiologic findings in two breeds of native and Holstein cattle in terms of LSD during three years of active care, depending on the environmental status of Iran.

In this study, 32 traditional unvaccinated epidemiologic farms were investigated, including 3450 cattle (cows, heifers, suckling calves). The cattle were divided into two groups; group 1 comprised of 1652 native breed and group 2 included 1798 Holstein breed. The animals were studied from 2014 to 2017.

The type of research study was case series that compared the frequency of disease symptoms and death rate among the two groups. Information in term of questionnaires was analyzed upon the disease zones, stockbreeders who had infected cattle, the number of cattle, introduction of new cattle to the units, age, sex, breed, type of protection system of infected cattle, intervening factors like vaccination, the observed signs/symptoms, the infection date, the disease process, cures, and their results. The study of disease process was done by active surveillance through weekly visiting of units and completing the required forms until improvement time.

The clinical diagnostic index of the disease was firstly based on the appearance of at least five skin nodules as well as lesion biopsies and later sending the samples to the Department of Animal Viral Vaccines, Razi Vaccine and Serum Research Institute (RVSRI), Iran.

Six items including edema of the legs, separation of nodules, pneumonia, weight loss, mortality and morbidity rates were comparatively analyzed in two groups by SPSS software version 22.0 and level of significance was obtained through the Chi-square test.

The data analysis showed a significant difference in morbidity rates (P≤0.05). The morbidity rates were reported 1.03% in group 1 and 1.98% in group 2. Therefore, the morbidity rate was lower in native cattle compared to the Holstein cattle. Furthermore, the results showed that the clinical appearance of signs such as pneumonia and edema of the legs was different in two groups.

Moreover, there was no significant difference between the two groups in terms of mortality rate. The rates of mortality were reported 5.88% in group 1 and 11.42% in group 2 )Figure 2).

LSD was reported for the first time in 2014 in Kurdistan province of Iran. The disease rapidly spread around the country (Norian et al., 2017). In Zanjan, located in the northwest of Iran, the disease was first seen in one of the rural epidemiological units located on the edge of the Qezelozan River which originated from Kurdistan Province, Iran. Most of the reported areas were related to the units located on the edge of this river. Since the disease was mostly transmitted by insect vectors, the high infection level was 94% from May to August and the disease first appeared in the epidemiological units near the river.

Several studies have compared the native breeds with European high-producing breeds such as Holstein and Friesian that correspond to a relative resistance of the native breeds, however, there is no report on the comparative and statistical investigation of clinical or epidemiological appearance of the disease in Iran. The main symptoms of LSD are skin nodules, edema of the legs, and respiratory problems (Kayesh et al., 2020; Tuppurainen et al., 2018). The most common symptom observed in this study was skin nodules on different parts of the body, including neck, body surface, muzzle, tail, limbs, inguinal, and genital organs. Sometimes the nodules were separated from the skin in 20 to 40 days and had left some scars on the skin (Figure 3). But often they gradually disappeared after 1 to 9 months. Sometimes, nodule scars were observable in the skin surface after 2 years in one crossbred case. The degrees of separation and absorption of nodules were statistically analyzed and recorded for both groups. 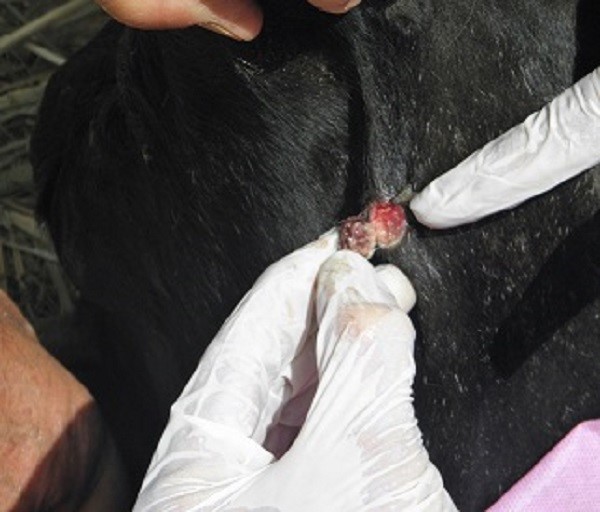 The nodules, which are the clinical signs of the disease, appeared 48 hours after fever appearance (Kiplagat et al., 2020; Norian et al., 2016). The number of nodules varies from a few lesions to multiple lesions that cover the whole body in severe cases. The nodules commonly appear on the head, neck, perineum, genitalia, udder, and limbs with sizes 5 to 50 mm (Kononov et al., 2019). The nodules are round, firm, normally raised from the skin, and involves not only the epidermis, but also dermis and muscles. Ulcerative skin lesions may appear in different sites such as conjunctiva, nostrils, mouth, pharynx, trachea, esophagus, and abomasum. Other signs of the disease are pneumonia, epiphora, saliva, nasal discharges, laminitis, and also swollen legs in some cases (Feyisa, 2018). The fever may last more than a week in severe cases and abortion may occur in pregnant animals (Tuppurainen et al., 2018). The convalescence period depends on the severity of lesions but varies between 4 to 12 weeks. Some small nodules disappear and others slough off, leaving secondary bacterial infections and holes on the skin. The large nodules may be fibrotic and persist for several months which are called “sit fasts” (Barnard et al., 2005; Weiss and Gard, 2013). Pneumonia, which shows the progress of the disease, was also investigated in both groups. The edema caused by vascu-litis was observed in the limbs of some infected cases that resulted in laminitis. The frequency of this clinical sign was analyzed in both groups as well. Weight loss was the other sign observed in the cases affected by infectious diseases. The cases with weight loss immediately after disease were also investigated in both groups. In this study, the clinical signs were separately discussed and compared between two breeds and the frequency of each one was considered.

This study showed that native breeds were more resistant than Holstein and the rate of morbidity in native cattle (1.03%) was significantly different from the Holstein cattle (1.98%). Moreover, the results showed that the appearance of pneumonia and edema of legs in native cattle were significantly lower than those in the infected Holstein cattle (P< 0.05).

This study is in agreement with studies by Davies (1991) and Tageldin et al. (2014) who showed that clinical signs caused by LSDV in dairy productive breeds like crossbred cows and Friesian were more sensitive or thin skin cattle and Bostaurus were very sensitive to LSD while native breeds such as zebu and crossbred zebu were naturally resistant to the virus. Moreover, it is reported that the imported Bos-taurus were more sensitive than native Bostaurus breeds (Al-Saad and Al-Saad, 2020). The studies conducted in Turkey, Ethiopia, and Oman also have reported the same results (Şevik and Doğan, 2017; Tageldin et al., 2014).

The infection to LSD among the African native zebu breed was lower than the same breed out of Africa. The reports claim that the nodules and lesions might be very frequent in zebu but other clinical signs and mortality rates were very few in this breed (Tasioudi et al., 2016). The results of a study done in Ethiopia showed that the rate of disease outbreak was the same between zebu and Holstein-zebu breeds (Acharya and Subedi, 2020). The British breeds, especially Channel Island, are more susceptible to the disease than zebu breed.

A study conducted by Gari et al. in Ethiopia in 2011 showed that the rate of LSD outbreak in Holstein Friesian crossbred cows (93.33%) was significantly higher than that in the native zebu cattle (1.25%). The annual mortality rate in Holstein Friesian crossbred cows (7.43%) also was higher than that in native zebu cattle (1.25%). Botaurus breeds such as Friesland cattle showed more severe clinical signs than thick skin breeds such as Afrikaner and Afrikaner crossbred cows, and all ages were sensitive to the disease. In this study, the cows at peak milk as well as calves showed severe clinical signs (Coetzer, 2004). Despite the supportive and curative measures such as penicillin with a dose of 30,000 IU/kg for 4 days and Ketoprofen with a dose of 2.2 mg/kg for 3 days, as well as vitamin AD3E injection, losses occurred in the cattle. The mortality rate was compared in both groups.

There are contradictory results about the age of being infected with LSD. Some studies claimed that the mortality rate was high among young animals (Acharya and Subedi, 2020) while some others demonstrated no significant relationship between morbidity and age (Şevik and Doğan, 2017).

In conclusion, upon the environmental condition of Iran, clinical findings of LSD were nearly akin to previous studies, and results showed that morbidity rate and clinical signs in native breeds were less than those in Holstein breed. In this study, the clinical signs were separately discussed for the first time between the two breeds and the frequency of each sign was considered. These findings provide useful information about the incidence rate in two groups and the significant signs of limb edema and pneumonia in Holstein cattle.