BACKGROUND: Anaplasmosis is caused by an obligate intracellular, gram-negative microorganism, which be-longs to the family Anaplasmatacea and can be transmitted by ticks and other arthropods.

OBJECTIVES: The present study aimed to investigate the status of Anaplasma spp. infection by microscopy and molecular methods in dromedary camels in Bushehr province, Iran.

METHODS: A total of 139 blood samples were collected from dromedary camels in Bushehr province. Giemsa staining and nested-polymerase chain reaction (PCR) were conducted to detect Anaplasma infection in the drome-dary camels.

RESULTS: We found that 27 (19.4%) out of the total 139 blood samples were suspected for the presence of Ana-plasma spp. by morphological study. The PCR and nested-PCR sequencing results showed 111 (80%) and 134 (96%) samples positive for Anaplasma spp. and BLAST search in NCBI GenBank presented 100% identity with Candidatus Anaplasma camelii.

Anaplasma spp. are obligate intracellular organisms that cause anaplasmosis in animals and humans. The members of the Anaplasmatacea family can be transmitted by ticks and other arthropods. The genus Anaplasma entails diverse species, such as A. marginale, A. centrale, A. phagocytophilum, A. bovis, A. ovis, and A. platys (Rymaszewska et al., 2008). Up to now, A. phagocytophilum, A. ovis, and newly diagnosed Candidatus Anaplasma camelii (genetically close to A. platys) have been detected in camels by molecular methods (Bahrami et al., 2018; Bastos et al., 2015; Li et al., 2015; Noaman, 2018).

Bushehr province is one of the main camel breeding areas in Iran. Therefore, we investigated the presence of Anaplasma spp. in the dromedarian camels in Bushehr province, Iran.

Blood samples were collected from 139 healthy or anemic dromedaries throughout Bushehr province with a mean annual rainfall of 237-350 mm in the South of Iran between 28° 58' 59.99" N latitude and 50° 48' 59.99" E longitude. A thin layer of blood was spread on a clean dry microscopic glass slide, allowed to dry, and stained by Giemsa staining. In summary, the smears were immersed in pure methanol for fixation and allowed to air dry for 30 sec. The slide was flooded with 10% Giemsa stain solution for 45 min.

Total DNA was extracted from the blood samples employing a DNA extraction kit (MBST, Tehran, Iran) according to the manufacturer’s instructions. The DNA extraction was evaluated using common primer pairs (camel-act F: 5′-ttacaatgagctgcgtgtgg-3′ and camel-act R: 5′-gagtccatcacgatgccagt-3′ derived from the β actin gene of camels. Nested polymerase chain reaction (PCR) was performed according to the method of Noman (Noaman et al., 2009). Briefly, the samples infected with Anaplasma were assessed for the presence of the 16S rRNA gene of this rickettsia by PCR.

Two sets of primers were designed based on the 16S rRNA gene of Anaplasma (M60313). The first DNA amplification was carried out using primers F1 (5′-agagtttgatcctggctcag-3′) and R1 (5′-agcactcatcgtttacagcg-3′) of 16S rRNA sequences. To control the specificity of the PCR products for the 16S rRNA gene of Anaplasma spp., nested PCR was applied in which the additional primers F2 (5′-gcaagcttaacacatgcaagtc-3′) and R2 (5′-gttaagccctggtatttcac-3′) belonged to the same gene.

In PCR and nested PCR, about 20 ng of DNA solution was utilized in a total volume of 100 μL, including 10x PCR buffer, 2.5 U Taq DNA polymerase (Sinaclon, Iran), 20 μM of each primer (Sinaclon, Iran), 100 μM dNTPs (Fermentas), and 1.5 mM MgCl2 (Sinaclon, Iran). The reaction was completed in a thermal cycler (Bio-Rad) with the following program: 5 min incubation at 95°C followed by 35 cycles of 45 sec at 95°C (denaturation), 45 sec at 59°C or 55°C (annealing), 45 sec at 72°C (extension), and a final extension at 72°C for 5 min. Positive (available from previous work) and negative controls were used in each PCR. The annealing temperature for PCR using primers derived from the β-actin gene of camelids was 50°C. Next, the PCR products were electrophoresed on 1.5% agarose gel, stained with Cybersafe, and visualized under UV light. Purified nested PCR products were sequenced by Kowsar Company (Tehran, Iran). The resultant nucleotide sequences were analyzed by the basic local alignment search tool (BLAST) on the National Center for Biotechnology Information (NCBI) database website (http://www.ncbi.nlm.nih.gov/blast). A phylogenetic tree was created with MEGA 6 software (USA) applying the maximum likelihood method with bootstrap analysis (1,000 replicates).

Anaplasma spp. was detected in 27 (19.4%) of 139 blood smears by microscopy. For molecular characterization, first, the efficient isolation of DNA was ensured from each sample using the specific primers designed from the β-actin gene of camelids. Each sample was analyzed by PCR and nested PCR by two pairs of primers designed based on 16S rRNA and sequencing in the presence of Anaplasma spp. The PCR product was observed at 781 bp in PCR and 543 bp in nested PCR (Figure1). In the present study, Anaplasma spp. infection was detected in 111 (80%) specimens by PCR and in 134 (96%) cases by nested PCR. The similarity between all the sequenced Anaplasma spp. was identified to be 100% with Candidatus A.camelii from Iran (KX765882) and Saudi Arabia (KF843825.1-KF843823). The phylogenetic tree represented two major branches for Anaplasma spp., one of which contained Candidatus A. camelii and A. platys and the other included other Anaplasma spp. Wolbachia was in a separate branch (Figure 2). 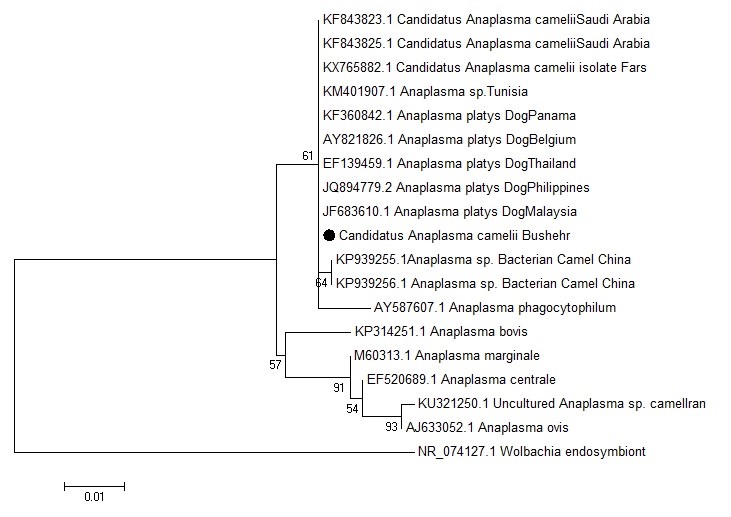 Figure 2. Molecular Phylogenetic analysis based on the 16S rDNA gene of Anaplasma obtained from dromedary camel in Bushehr province (showed with ●) by using Maximum Likelihood method. The percentage of replicate trees in which the associated taxa clustered together in the bootstrap test (1000 replicates) are shown next to the branches. Evolutionary analyses were conducted in MEGA6.

Anaplasmosis in camels is more commonly referred to as a subclinical disease and sometimes has symptoms, such as weakness, anorexia, and anemia. In the current investigation, microscopy and molecular techniques were used to detect Anaplasma spp. in dromedary camels in Bushehr province, Iran.

We determined the frequency of Anaplasma spp. microscopically in 19.4% of blood smears. The frequency of Anaplasma spp. infection using microscopy method has been reported as, 40.5% in Saudi Arabia (Ismael et al., 2016), 17% in Tunisia (Ismael et al., 2016; Selmi et al., 2019), and 17.4% in Iran (Ghazvinian et al., 2017). Some other studies did not detect Anaplasma in blood smears in Iran (Sazmand et al., 2019; Sharifiyazdi et al., 2017) and China (Li et al., 2015). The discrepancy in the results may be attributed to climatic conditions or misdiagnosis with Howell-Jolly's body or other pathogens, such as Mycoplasma. Considering the similarity of Anaplasma spp. to Howell-Jolly's body or other pathogens that lead to misdiagnosis, microscopic examination is not an appropriate method especially for the detection of reservoir animals.

Due to the disadvantages of microscopic techniques, the best method of diagnosis is molecular methods. The 16S rRNA gene with a high copy number was found to be convenient and appropriate for the detection of Anaplasma spp. even in small amounts. The molecular examinations (PCR and nested PCR) showed that 80% and 96% of camels were infected with Anaplasma species. Comparison between the results of microscopy and molecular methods revealed that the microscopic method was not enough sensitive (19.4% vs. 96% infection rate).

In this study, sequence analysis showed the highest identity (100%) between our sequences and the Candidatus A. camelii sequence from Saudi Arabia. There is a notable nucleotide difference in the hypervariable region of the 16S rDNA gene between the obtained sequence in the present study and A. platys. In line with other researchers, we believe that Candidatus A. camelii is an independent species. However, more extensive research is required on other Anaplasma genes. Genetic analysis of the 16S rDNA gene of dromedary camels in the hypervariable region revealed 100% identity with Candidatus A. camelii that was previously reported from Fars province, Iran (Sharifiyazdi et al., 2017) and Saudi Arabia (Bastos et al., 2015).

There is no conflict of interest.