BACKGROUND: In commercial hatcheries, chicks are deprived of feed and water for up to 72 h, which is a det-rimental effect on growth performance.

OBJECTIVES: Two experiments were designed to investigate the effect of hatching parameters and feeding time on the body and organ weights of chickens.

METHODS: In the first experiment, 300 of both early- and later-hatched broiler chicks received feed immedi-ately after hatching or 48 h later and were divided into four experimental groups. The body and internal organ weights of chicks were determined for up to seven days. In the second study, 370 embryos, which were incubated in a setter until the 18th day, were transferred to two hatchers, which differed their air and eggshell temperatures. Then, hatching and post-hatched parameters were followed.

RESULTS: Comparing early-hatched chicks, later-hatched chicks had significantly greater weight (p <0.05) on day 3 and better yolk utilization and higher relative liver and intestine (p <0.01) weights on day 2. However, early-fed chicks indicated significantly higher body weight (p <0.0001) until day 7 and early yolk utilization and higher internal organ weights than later-fed chicks. In the second experiment, when the air temperature of hatcher A (control) was kept at 37.5ºC, its eggshell temperature was determined at 38.5ºC, while the eggshell temperature of hatcher B was optimized at 37.5ºC, and its air temperature showed 36.5ºC. Earlier hatchability was higher in the control hatcher (46.8%) than hatcher B (27.1%), but later hatchability was reversed. However, final hatchability was lower in hatcher B (96.6%) than the control hatcher (98.3%).

CONCLUSIONS: Later-hatched and early-fed chicks showed greater body and internal organ weights, indicating better maturation of these chicks. The results of the second study indicated that the hatching window could be shorter and also shifted to the end of the incubation time by reducing the egg temperature.

In commercial hatcheries, chicks do not hatch out all at the same time, and there is a hatching window ranging from 24 h to 48 h. In practice, all chicks stay in the incubator until almost all have hatched. Normally, they receive neither feed nor water before transferring to the broiler house. For early-hatched chicks, this dietary- and water-deprived period can take up to 72 h. However, in many countries, there is a long distance between the hatchery and the broiler farm; therefore, the producer often has no options during shipment of birds over long distances (Willemsen et al., 2010). When after hatching, feed and water deprivation exceeds 24 h, which is common in commercial practice, it results in stress and can have long-lasting effects on growth performance, yolk utilization, intestinal developments, immune system activities, and increased early mortality (Van Roovert, 2016; Willemsen et al., 2010). Juul-Madsen et al. (2004) reported that chicks deprived of food for 48 h after hatching indicated poor viability and immune performance, as they showed poor growth and delayed developmental changes in circulating immune cells.

Eggshell temperature is influenced by embryonic heat production and heat transfer capacity of the air that depends on air temperature, relative humidity, and also airspeed or ventilation over the eggs; all of these are greatly dependent on incubator design. Temperature is one of the most important drivers of embryo development and, therefore, chick quality and their subsequent performances. Lourens et al. (2005) showed that eggshell temperature lower than 37.8°C during the first week of incubation resulted in a higher percentage of second-grade chickens up to 5% and shorter chick length. The high eggshell temperature during the hatching phase decreased chick development (Maatjens et al., 2016a, 2016b).

The OvoScan system is a method that can read eggshell temperatures and, accordingly, adjust the air temperature of the incubator. Therefore, the embryonic environment temperature is continuously adjusted in response to the actual eggshell temperature. This enables the constant creation of the optimum embryonic temperature. It is led to control the rate of metabolic development and heat production of the embryo, influencing hatching parameters and hatching window (Decuypere & Mitchels, 1992; Ipek et al., 2014; Nangsuay et al., 2016), as it was also affected by environmental hypoxia (Hassanzadeh et al., 2004, 2019).

In the present work, two independent experiments were designed. In the first experiment, chicks from different periods of the hatching window were given immediate or 48-h delayed feed. The purpose was to investigate the effect of hatching time with early- or later-feed access on the absolute body weight, relative yolk sac and internal organ weights, and heter-ophil/lymphocyte in post-hatch broiler chicks.

Regarding the results of the first experiment, the second experiment was designed as a pilot study. The main aim was to answer the question of whether the period of the hatching window could be reduced. Thus, the OvoScan system, a method for measuring eggshell temperature, was used to determine the air temperature of the incubator, consequently hatching parameters, and finally post-hatch performance of chicks followed, as has been done in the first experiment.

A total of 500 Ross 308 eggs with almost equal weight from a commercial broiler breeder flock around 48 weeks of age were placed in an incubator (Pas Reform BV, Zeddam, The Netherlands) under standard conditions for hatching. Hatched-chicks were divided into three categories regarding their hatching time process: Chicks hatched before 480 h of incubation were considered as early-hatched, between 490 h and 504 h as later-hatched, and between 480 h and 490 h as middle-hatched chicks, which the latter group was omitted and not used in this study.

Therefore, 300 chicks from both early- and later-hatched (150 chicks/hatched) were individually weighed and subjected to 12 pens in the same room. Each group, regarding their feeding process (i.e., early feed, immediately after hatching, and later feed 48 h after hatching), was again randomly divided into two subgroups, in total four groups (three pens/25 chicks/group). All birds were reared under a nearly continuous lighting program (23 h L: 1D) and had ad libitum access to water and commercial broiler food until 7 days of age. On days 0, 1, 2, 3, and 7 of age, seven chicks from each experimental group were randomly selected. First, chicks were weighed individually, and blood samples were taken for determination of the H/L ratio (Weimer, 2018). Then, they were slaughtered to measure the internal organs, yolk sac, liver, and total small intestines (empty). The weight of the internal organs was calculated as the percentage of chick body weight (Raji et al., 2017).

Four hundred eggs with almost equal weight from a breeder broiler farm were obtained and incubated in one setter (Pas Reform BV, Zeddam, The Netherlands) under standard conditions at 37.8°C with a relative humidity of 56%. On the 18th day of incubation, 370 survived embryos were transferred and divided into two different hatchers, carefully controlled by the OvoScan system (Figure 1). Hatcher A (control): its air temperature was constant at 37.5ºC with 66% relative humidity, and the eggshell temperature was automatically measured using the OvoScan system, which was fixed to eggshells until chicks hatched. Hatcher B: the eggshell temperature was constant at 37.5°C, but its air temperature was measured until chicks hatched. 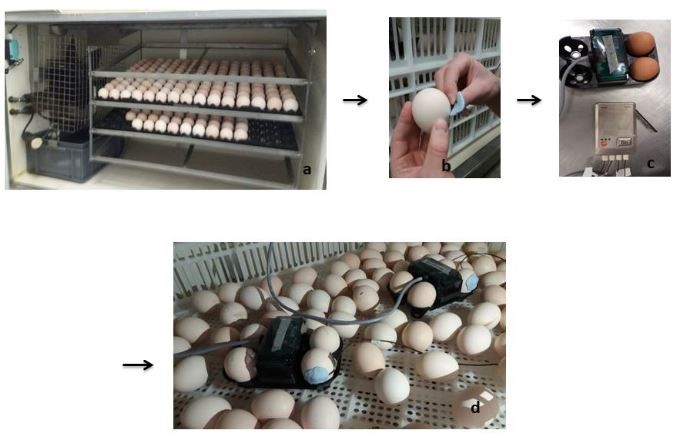 Figure 1. The procedure of OvoScan; a; Eggs in setter; b: Censor fixating to egg shells; c: Electronic tools of Ovoscan; d: Hatcher is determining the egg shell temperature.

During the hatching period, related hatching parameters e.g. percentages of hatchability at different periods and not hatched embryos were recorded. At the end of the hatching, 40 pulled chicks from each hatcher were randomly selected to determine chick quality by Tona score measurement (Tona et al., 2003). Then, a total of 150-day-old chicks from each hatchery were randomly selected (75 chicks-/hatc-her), weighed, and divided into six pens (three replicates/ 25 chicks each). They were reared under a nearly continuous lighting program (23 h L: 1D) and had ad libitum access to water and commercial broiler food until 5 days of age. On days 1 and 5 of age, eight chicks from each hatchery group were randomly selected, weighed, and slaughtered to deter-mine relative internal organs of the yolk sac, liver, heart, and total small intestine weights. Such measurements were also performed by sampling the external piping embryos on the 19th day of incubation.

Table 1. Absolute body weights (g) and the yolk sac weights as percentage of body weight at the different days in post hatched-chicks.

Table 3. Liver and small intestines weights as percentage of body weight at the different days in post hatched-chicks

There was no hatching influence on the H/L ratio, but the H/L ratio was significantly (P<0.0001) higher in later-fed chicks compared to early-fed chicks at 3 days old, causing stress in chicks deprived of feed (Table 4).

Table 4. The H/L (heterophil/ lymphocyte) ratio at the different days in post hatched-chicks

Table 5. The results of optimized air and egg shell temperatures, different times of the hatchability and quality score in 40 new hatched-chicks.

Within columns in each age, means with no common superscripts are significantly different (P<0.05).

Early access to feed and water after hatching has been shown to be an important factor for subsequent performance. In the present study, 48-h delayed feed for newly hatched chicks resulted in retarded growth at the first week of age, which is in agreement with previous reports (Wang, 2016). The later-hatched chicks indicated greater body weight compared to early-hatched chicks, confirmed by recent reports (Wang, 2016; Wang et al., 2016).

Several researchers mentioned the involvement of AMP-activated protein kinase (AMPK) in different neonatal performances of chicks hatched at different times (Steinberg & Kemp, 2009; Wang, 2016; Wang et al., 2016). The authors found a significantly higher level of hypothalamic AMPK in their later-hatched chicks than in early-hatched chicks and suggested that it could regulate energy metabolism in response to nutrient and hormonal signals at the cellular and whole-body level. However, AMPK was not measured in our study, but regarding our lab personal communications (KUL, Belgium), the higher activity of AMPK in later-hatched chicks might be responsible for more energy intake and lower energy expenditure, resulting in faster post-hatch growth. The relative yolk sac weights as the percentage to chick weights were significantly lower in later-hatched chicks, confirmed the earlier study of Wang (2016) that showed yolk utilization after hatching was faster for the later-hatched chicks. The faster yolk absorption could be related to more organ maturation, in chicks hatching later in the hatch window (Van de Van, 2013). Early-fed chicks indicated significantly lower relative yolk sac weight compared to later-fed chicks at different ages, confirmed previous reports (Noy et al., 1996; Wang, 2016). The authors argued that the yolk utilization was more rapid in fed chicks than in fasted chicks and suggested that the transfer of yolk can be facilitated by the intestinal motility of fed chicks.

Except for the relative heart weight in the external piping embryos that was significantly higher in hatcher B than in hatcher A, no more significant hatching effect was found on the organ weights of post-hatch chicks in this study. The heart is an organ that is most affected by abnormal incubation temperature (Ipek et al., 2014); however, in the present work, the abnormality of heart weight returned to the normal weight on days 1 and 5 of post-hatch chicks.

The second experiment, as a pilot study, was conducted to investigate the effect of different temperatures, mainly eggshell temperature profiles, in the hatchery on embryonic development. In this part, a clear result was observed in hatcher B, when the hatching window was shorted, and also the majority of hatchability was shifted to the end of hatching times (at 490 h of incubation onward). This may have implications in combination with early or retarded feeding after hatching and should be examined in further studies.

Financial support was provided by the research committee of Tehran University, Faculty of Veterinary Medicine. Department of Biosystems, KUL, Belgium, is appreciated for their kind support.