Oxaliplatin Treatment for 3-Weeks Does not Affect Mice Kidney Structure: A Stereological Study

BACKGROUND: Oxaliplatin (OX) is the third-generation platinum anticancer drug used to treat various types of cancers. Although oxaliplatin has a renal metabolism, the evaluation of its nephrotoxicity is limited.

METHODS: Twenty Balb/C healthy male adult mice were divided into two groups. The mice from group 1 re-ceived 3 mg/kg oxaliplatin three times a week for 21 days, and in group 2 the mice were injected with saline. The left kidneys were used to measure the kidney volume, the volume fraction of cortex and medulla, glomerular vol-ume, glomerular mean volume, glomerular number, epithelial volume, and length of the proximal (PCT) and distal (DCT) convoluted tubules.

CONCLUSIONS: The results did not demonstrate any deleterious effect of OX in the mentioned dose on kidney structure in mice. These findings may help infer contradictory outcomes of different studies in this field and promote future investigations.

In the present study, stereology was used to estimate the volume of kidney, cortex, medulla, and glomeruli, estimate the glomerular number as well as epithelial volume and length of the proximal and distal convoluted tubules (PCT and DCT, respectively) in mouse treated with oxaliplatin for better evaluation of its nephrotoxicity.

The left kidneys were dissected and were weighed using a digital scale. Isotropic, uniformly random (IUR) designs were applied for sampling each kidney (Nyengaard, 1999). Kidneys were embedded in agar, and the orientator method was performed (Figure 1). In the first step, each kidney was placed at the circle's center divided into equal parts. A random number between 0 and 99 was selected, and the embedding media was cut in that direction. In the second step, the kidney halves were placed on the cut agar surface on the second circle with sine-weighted divisions in the direction 1-1, and a random number between 0 and 99 was chosen. Afterward, kidney halves were sectioned into 2 mm thickness slabs parallel to the direction of the selected random number.

Estimation of the Volume

The volume of the kidney was estimated using its weight. The volume density and total volume of the renal cortex, medulla, glomeruli, PCT, and DCT epithelium were estimated by a point-counting method (Figure 2a) and the following formula on thin sections (Gundersen et al., 1988):

where P (structure) and P (kidney) are the total number of the points hitting the structure (cortex, medulla, glomeruli, PCT, and DCT epithelium) and the kidney, respectively.

Figure 1. Schematic diagram of the orientator method to generate isotropic, uniformly random (IUR) sections. (a): kidney was placed at the center of the circle divided into equal parts. A random number between 0 and 99 was selected (here 70), and the embedding media was cut in that direction. (b): kidney halves were placed on the cut agar surface on the second circle with sine-weighted divisions, and a random number between 0 and 99 was selected (here 3). Afterward, kidney halves were sectioned into 2-mm-thick slabs parallel to the direction of the selected random number.

Estimation of Length of Renal Tubules

The length density and total length of the PCT and DCT were estimated by using an unbiased counting frame (Figure 2b) and the following formula on thin IUR sections (Nyengaard, 1999):

Figure 2. Stereological procedure for estimation of volume and length of kidney structures. (a): The point counting grid was superimposed on the kidney section to estimate volume structure. The right upper corner of each test point (see arrow) was considered for hitting relevant renal structures (periodic acid Schiff staining technique, scale bar 250 µm). (b): The counting frame with exclusion lines (red) and inclusion lines (green) was superimposed on the kidney section for length estimation. The profiles of tubules that were either entirely or partly inside the counting frame and did not touch the exclusion lines (red lines) were counted. Note that the larger frame was used for counting proximal convoluted tubules, while the smaller one was used for distal convoluted tubules. Here three proximal (PCT) and two distal (DCT) convoluted tubule profiles are counted (periodic acid Schiff staining technique, scale bar 100 µm).

Estimation of the Number of Glomeruli

The physical fractionator method was applied for counting glomeruli on thick section disector pairs (sampling and look-up sections). An unbiased counting frame was superimposed on a known fraction of the two slides by moving the motorized microscope stage in equidistant steps in x- and y-directions. The glomerular were sampled in the reference sections, and then glomeruli which were not seen in the look-up sections, were counted (Figure 3). Reference and look-up sections were reversed to double the number of disector pairs. The total number of glomeruli in each kidney was calculated as the sum of counted glomeruli multiplied with the total inverse fractions (Lødrup et al., 2008): 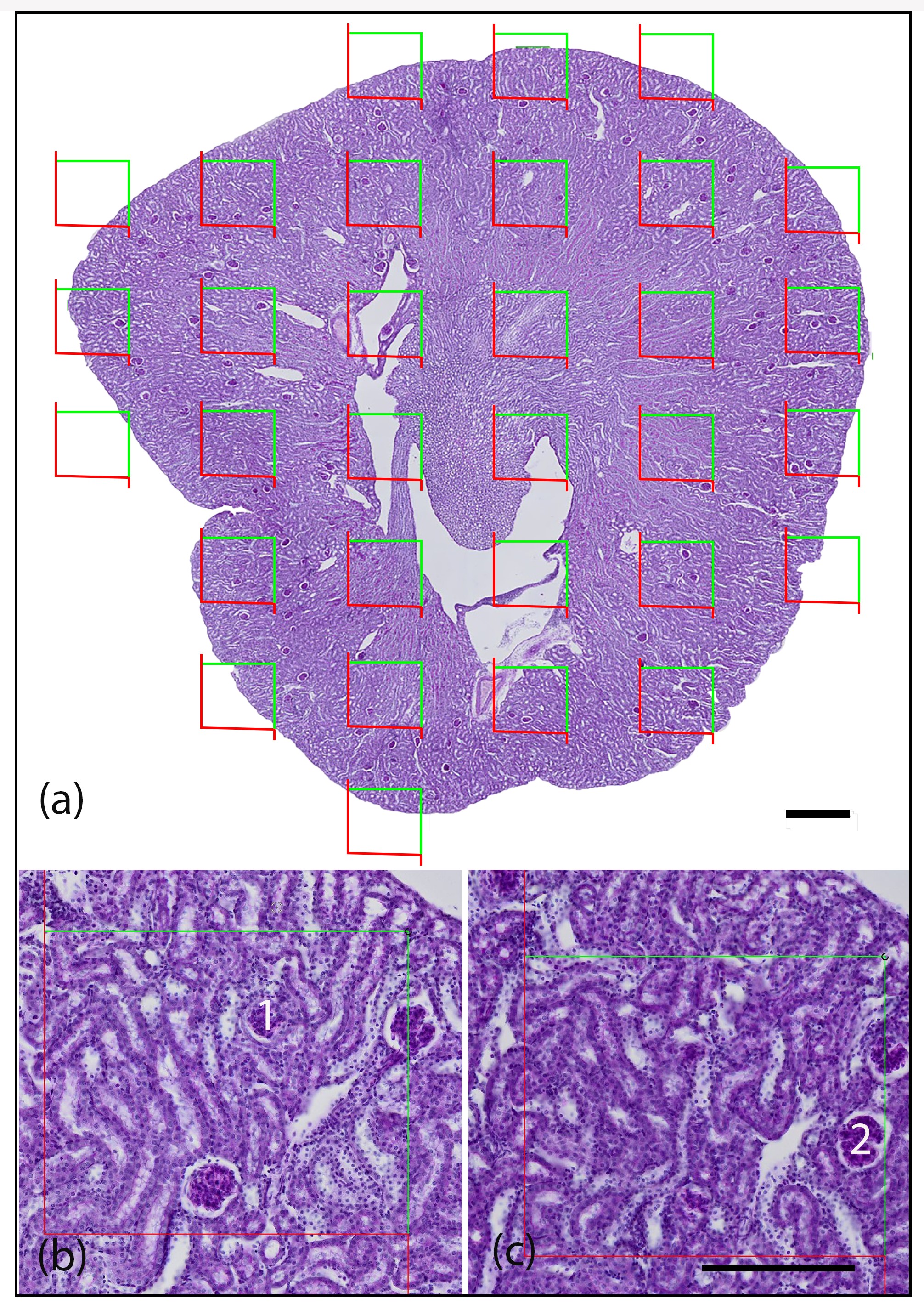 Figure 3. Estimation of the number of glomeruli using the physical fractionator method. (a): A known areal fraction of the two sections were sampled using the motorized microscope stage with an equal step length in the x- and y-directions (periodic acid Schiff staining technique, scale bar 500 µm). (b): reference section and (c): look-up section. An unbiased counting frame was superimposed on each field of view. Then, glomerular profiles inside the counting frame or touching the inclusion lines (green) without touching the exclusion lines (red) were sampled by the counting frame in the reference section. Glomeruli were counted if present in the reference section but not present in the look-up section (glomeruli profile 1 here). Reference and look-up sections were reversed to increase the efficiency of the technique. In this way, another glomerulus (2) was counted (periodic acid Schiff staining technique, scale bar 250 µm).

Estimation of Mean Volume of Glomerulus

The results were expressed as mean ± standard deviation. Student t-test was applied for comparison mean between groups. A P-value < 0.05 was considered statistically significant.

No impairments of oxaliplatin (3 mg/kg three times a week for 21 days) treatment on kidney structure could be observed in this study using design-unbiased stereology.

The data are expressed as mean ± SD values

Table 2. Epithelial volume and total length of proximal (PCT) and distal (DCT) convoluted tubules of the control and experimental groups.

Indeed, oxaliplatin has been developed as a newer generation of platinum anticancer agents with high water solubility and reduced nephrotoxicity (Ali, 2010). Accordingly, oxaliplatin did not show any renal toxicity in experimental animal studies. Mathé et al. have reported neither changes in blood urea nitrogen and serum creatinine nor histopathological damage in mice kidneys after oxaliplatin treatment (Mathé et al., 1985). Cambar and Pourquier have examined urinary creatinine and enzyme excretion and did not report any alteration following oxaliplatin administration in rats (Cambar and Pourquier, 1990).

Based on in vitro studies, Legallicier et al. have reported a low cytotoxic effect of oxaliplatin in rabbit tubular cells (1996). While, according to Waly et al., oxaliplatin increases cell death and cell membrane damage and induces oxidative stress in human embryonic kidney cells (2011). Similarly, Kanou et al. have reported a nephrotoxic effect of oxaliplatin in vitro using renal cortical-slices and no nephrotoxicity in an in vivo study (2004). They explained that in vitro experiments may not directly reflect the in vivo renal toxicity. The concentration of active biological oxaliplatin may differ from that under fixed conditions in vitro.

Oxaliplatin did not show any nephrotoxicity in clinical trials, and it was selected for clinical development based on its favorable activity/toxicity profile (Extra et al., 1990; Taguchi et al., 1998; Massari et al., 2000; Takimoto et al., 2007). However, recent case reports suggest induction of renal toxicity like acute tubular necrosis (Filewod and Lipman, 2014; Pinotti and Martinelli, 2002), renal tubular acidosis (Linch et al., 2007; Negro et al., 2010), hemolytic anemia (Phull et al., 2016) in patients by oxaliplatin in combination with other agents. Generally, oxaliplatin may induce renal toxicity through direct renal effect as a result of renal accumulation (Joybari et al., 2014) or immune-mediated renal damage due to oxaliplatin-dependent anti-red blood cell antibodies (Cobo et al., 2007; Forcello et al., 2015). Some studies revealed that imbalance between organic cation transporters in the basolateral membrane and multidrug and toxin extrusion transport proteins in the brush border membrane of PCT can cause platinum renal accumulation and nephrotoxicity (Yokoo et al., 2007; Yonezawa and Inui, 2010). However, the exact cellular and molecular mechanism of oxaliplatin effect on the kidney is not clear. Our animal experimental study which examined the epithelial volume and length of PCT and also DCT along with cortex volume (which is mainly formed by PCT and DCT) did not show any change in oxaliplatin treated animals. However, it is presumed that repeated cycles of oxaliplatin treatment in patients and association with 5-fluor oruacil can cause nephrotoxicity (Márquez et al., 2013; Jain et al., 2015; Waly et al., 2011).

It has been shown that oxaliplatin binds to plasma protein and is excreted into the urine; however, it is unclear whether it has a glomerular filtration or renal tubular secretion for the detailed assessment of kidney injury (Kanou et al., 2004). In this study, glomerular quantities (glomerular mean volume, total glomerular volume, and glomerular number) were investigated and did not demonstrate any change following oxaliplatin treatment in mice.

In conclusion, oxaliplatin administration (3 mg/kg) for 3-weeks did not show an adverse effect on the kidney. These findings may help infer contradictory outcomes of different studies in this field and offer a baseline for future detailed studies with varying doses of oxaliplatin treatment.

The authors have nothing to disclose.