Intrathoracic Ectopic Liver in a Dog: A Case Report

The accessory hepatic lobe is an extremely rare anomaly reported in humans and animals. A large domed solid mass and two smaller masses were noticed during thorax dissection in a six-year-old mixed breed male dog with no previous history of the disease, which was fixed to be used in the anatomy hall. The masses were placed adjacent to the diaphragm, between the lung's right and left caudal lobs. The masses with a common thick vascular pedicle had pierced the diaphragm and run to the falciform ligament of the liver. Histological findings showed liver tissue and hepatocytes were arranged radially around the central vein. There were sinusoids between the hepatocyte plates, dilated as telangiectasia in some areas. The study of the pedicle revealed a normal elastic artery, normal vein, and normal biliary duct crossed to the falciform ligament in the abdomen.
The macroscopic and microscopic findings revealed type I intrathoracic ectopic liver.

An accessory or intrathoracic ectopic liver lobe is often asymptomatic clinically (Iwaki et al., 2017). Trauma, postoperative complications, congenital diaphragmatic hernias, or other malignancies affecting the diaphragm are the more typical circumstances where the liver tissue is found in the thoracic cavity (Iber & Rintala, 1999; Yaguchi et al., 2015; Iwaki et al., 2017). It should be noted that this malformation has no sex predilection (Vercelli-Retta, 1978).

Ultrasonography or CT-guided biopsy (Choi et al. 2008) and MRI (Jambhekar et al. 2010) may contribute to establishing an accurate diagnosis. In one case, the supradiaphragmatic heterotopic liver was misdiagnosed as pulmonary sequestration. Color Doppler ultrasonography or angiography may show a feeding vessel and also contribute to differentiating pulmonary sequestrations from the heterotopic liver (Lee et al., 2016). The diagnosis is usually made after laparotomy by histopathological confirmation (Jambh-ekar et al., 2010).

A 6-year-old mixed breed male dog weighing 15 kg was fixed by formalin to be used as a model in the anatomy hall of the Anatomy Department of the Veterinary Faculty at the Shahid Bahonar University of Kerman, Iran. There was no previous history of traumatic diaphragmatic hernia or surgery, and no clinical abnormalities were noticed before its submission for fixation.

During the thorax dissection, the gross examination revealed a large domed solid mass, appro-ximately 12.5×5 cm at its base and height, respectively. Moreover, two significantly smaller roundish masses were positioned ventral; the larger one was about 3.5×1.5×1.2 cm (Figures 1 & 2).

The base of the larger mass and the two smaller ones were placed near the diaphragm, towards the left side of the thorax, between the right and left caudal lobs of the lung. The accessory lobe of the lung was placed at the left side of the larger mass (Figure 3). All masses with a common thick vascular pedicle had pierced the diaphragm and run to the liver's falciform ligament (Figure 1). All masses were brown and capsulated (except around the pedicle) with an irregular surface and had a firm consistency such as liver that differentiates it from the lung (Figures 1 and 2). 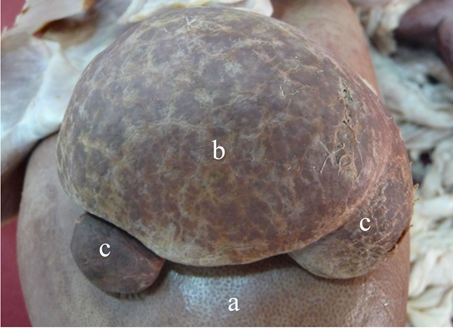 Figure 2. Gross appearance of the liver (a), main mass (b), and two smaller masses (c) of the accessory. Cranial view. 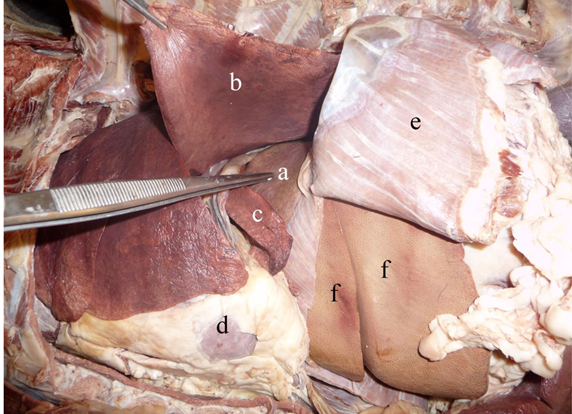 Figure 3. The position of the supradiaphragmatic accessory liver in the thoracic cavity. A) Accessory liver, b) Caudal lobe of the left lung, c) Accessory lobe of lung, d) Heart, e) Diaphragm, f) Liver.

To perform histopathological evaluation, 1×1×1 cm samples were taken from the three different parts of the masses, washed with PBS (pH 7), and placed in a 10% buffered formalin solution (pH 7.2). After ten days, the samples embedded in paraffin were fixed in a 10% neutral formaldehyde solution and dehydrated in ethanol and xylol alcohols. The 5 μm sections were stained with the H&E technique for evaluation with a light microscope.

The mass revealed histological features consistent with the liver tissue in the microscopic examination. Hepatocytes were polygonal with the central nuclei and arranged radially around the central vein. There were sinusoids between the hepatocyte plates, which were dilated as telangiectasia in some areas. The portal areas consisting of interlobular bile ducts, interlobular arteries, and interlobular veins were also present. The central veins were also noticed at the center of the hepatic lobules (Figures 4, 5, & 6). The study of the pedicle revealed a normal elastic artery, normal vein, and normal biliary duct crossed to the falciform ligament in the abdomen. Moreover, the intrathoracic ectopic liver was diagnosed according to the histological findings. However, the histopathologic study revealed no hepatic fibrosis or vascular structure disorders. No gross abnormalities were evident in the other organs. 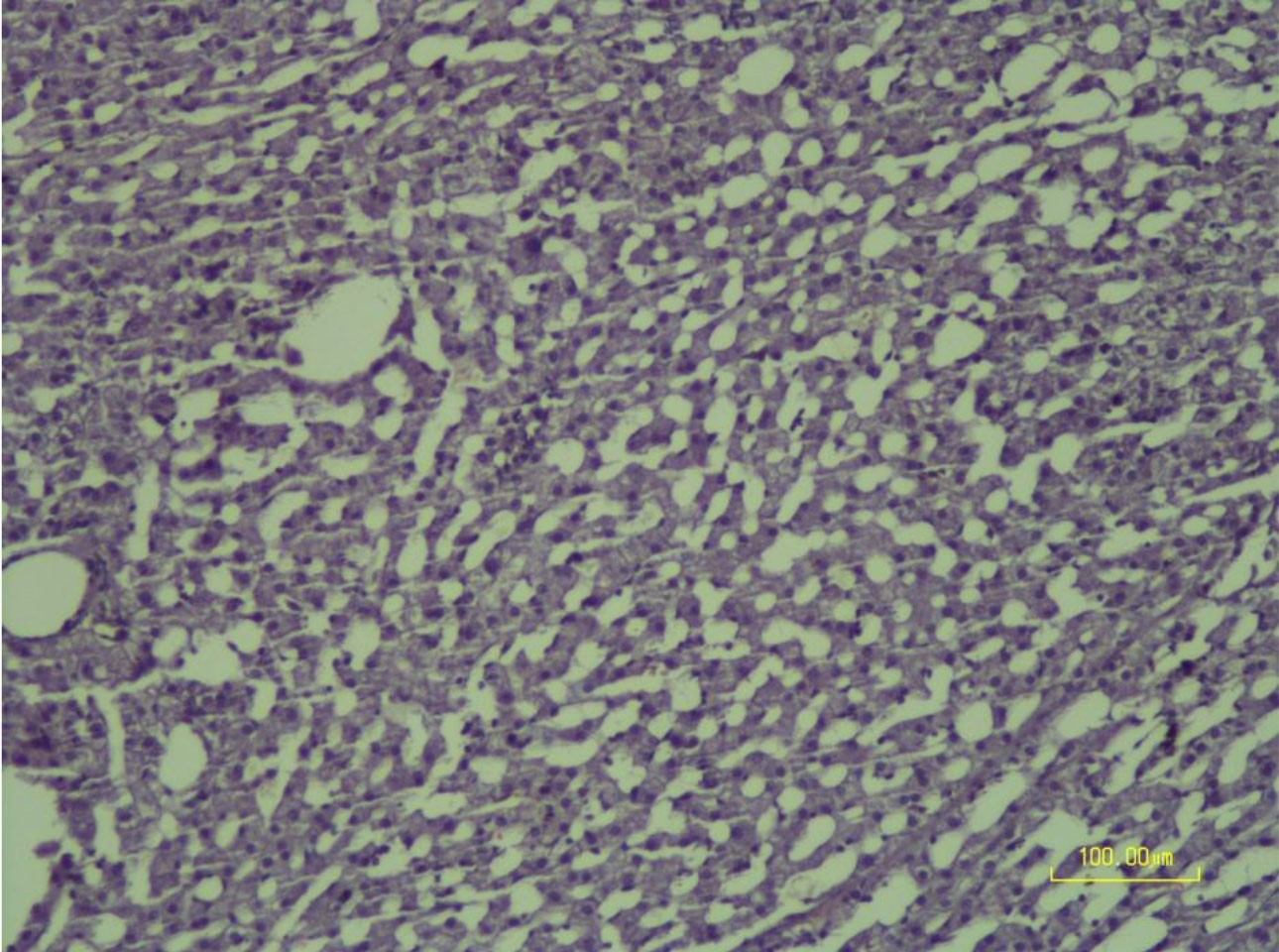 Figure 4. Polygonal hepatocytes arrange radially around the central vein, and there are sinusoids between them (H&E, Bar=100 µm). 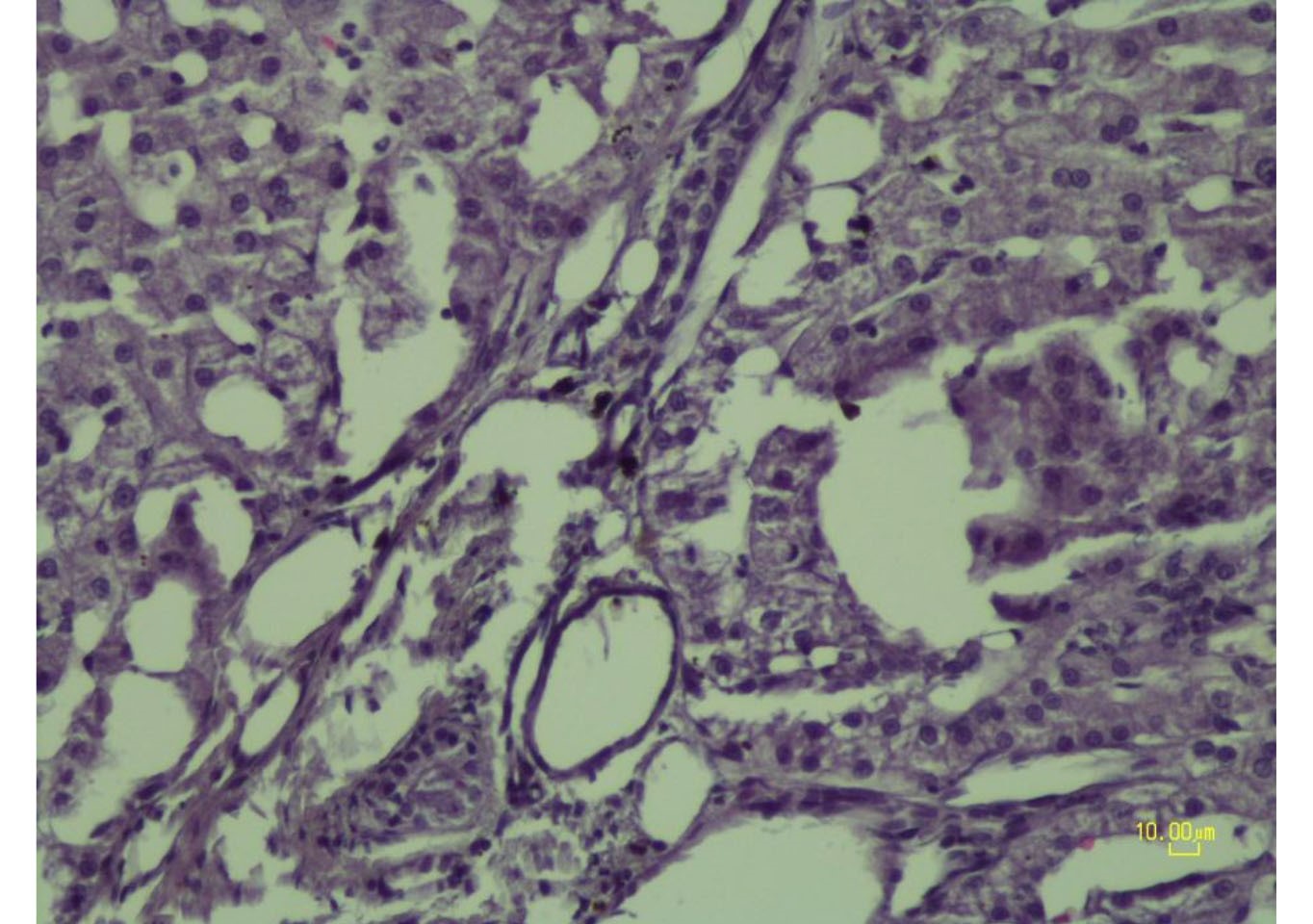 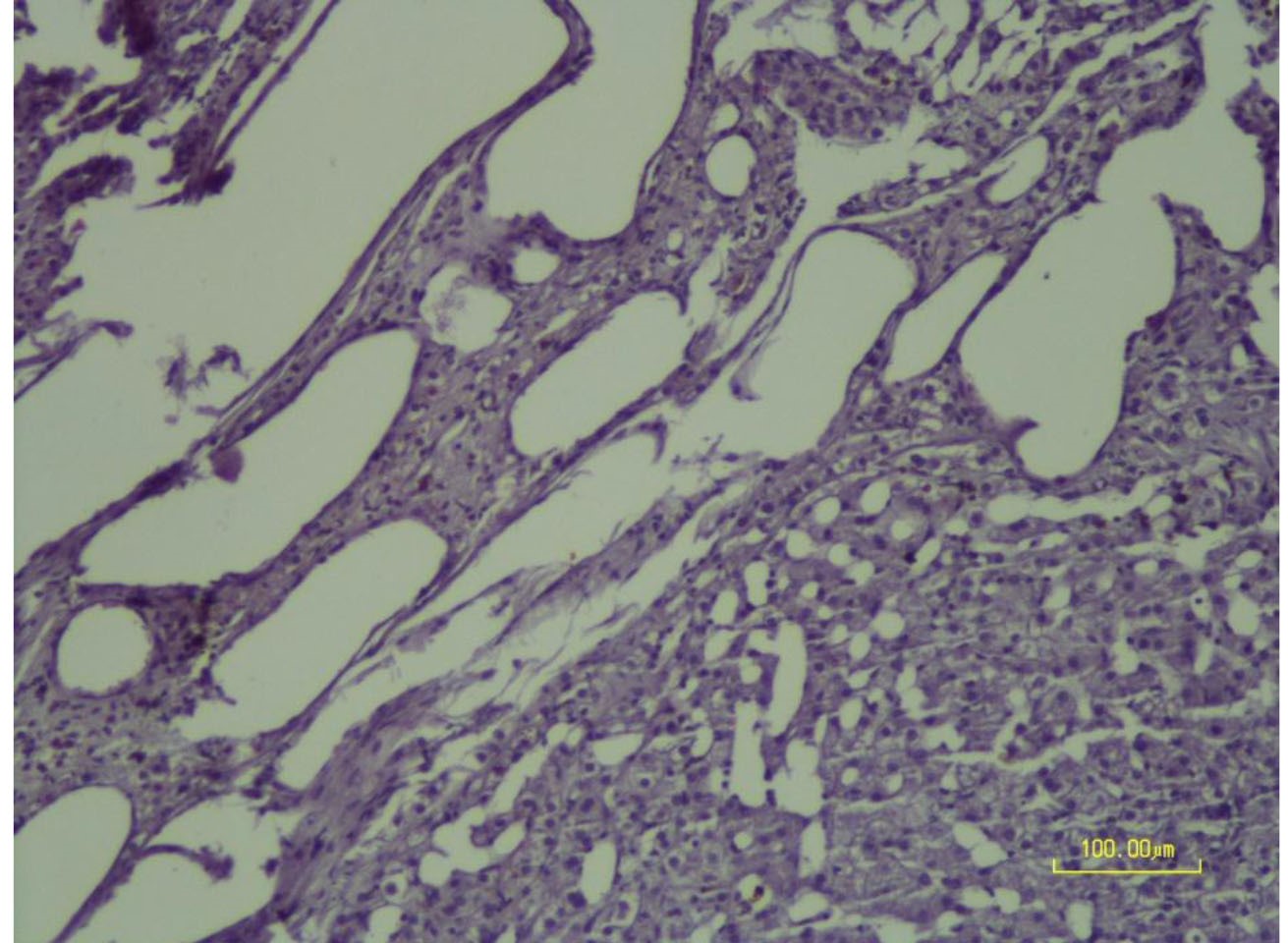 The ectopic liver has been classified into four types (Arslan et al. 2014): 1) The accessory lobe of the liver with a considerable size and a connecting stalk to the liver, 2) a small accessory lobe of the liver attached to the liver, (3) ectopic liver with no connection to the liver, and (4) the microscopic ectopic liver tissue. The first or second types of ectopic liver mainly occur in the intraabdominal cavity; however, few cases of supradiaphragmatic ectopic are reported in the literature. The case described in the present study belongs to the first type. Although the most probable cause of this event is the formation of an accessory liver lobule with regression or atrophy of the original connection to the true liver (Mendoza et al. 1986), we presented an intrathoracic accessory liver lobe with a pedicle connected to the abdominal liver. The case was similar to those in some studies describing a mass attached to the liver proper by a vascular pedicle, all of which are mainly transdiaphragmatic (Chen et al. 2014; Yucel et al. 2015).

Three typical sites are described for this anomaly, with the right costophrenic variety being the most common site (Vercelli-Retta, 1978) in humans (An et al., 2010; Jambhekar et al., 2010) and animals (Hifumi et al., 2015; Machado and Lozzio, 1972). The other sites are the left supradiaphragmatic liver lobe and adjacent to the inferior vena cava (Vercelli-Retta, 1978). In our case, the supradiaphragmatic mass was located at the left side of the hemithorax, close to the heart. This finding was consistent with those reported in previous studies (Hifumi et al. 2014; Yucel et al. 2015).

On the other hand, the lack of bile accumulation in the liver sections suggests the likelihood of communication between the ectopic pedicle and the biliary tree of the abdominal liver. The microscopic study may propose that this communication was via the falciform ligament. In other words, the histological analysis revealed no evidence of cirrhosis or cholestasis (Figures 4, 5, & 6). It showed appropriate functional biliary drainage of accessory lobe to the vascular supply within the pedicle.

According to Machado and Lozzio (1972), the ectopic hepatic lob shows hepatocytes positioned in the uncommon rows of variable thickness surrounding abnormally dilated sinusoids. Furthermore, severe congestion, ruptured sinusoids, focal hemorrhage, clusters of blood cells, and bile pigment in the areas of hemorrhage were also observed. None of these abnormalities were noticed in the present study; however, there was a three-part intrathoracic liver with no completely-separated parts.

In some animals, the supradiaphragmatic ace-ssory lobe is reported along with other anomalies such as hydronephrosis (Machado and Lozzio, 1972), which were not noticed in our case.

The possible heritability of the accessory lobe of the liver is unknown (Machado & Lozzio, 1972). According to the literature, several possible mechanisms have been proposed for the development of the heterotopic liver. In pediatric and young adult patients presenting supradiaphragmatic liver with a connection such as a transdiaphragmatic pedicle into the liver proper and/or diaphragmatic hernia, it can be explained by an anomaly in the development of diaphragm and liver bud (Lande et al., 2015).

Embryologically, the hepatic bud originated from the foregut grows into the mesenchyme of the septum transversum during the fourth week of gestation and proliferates actively (Chandramohan et al., 2014). At approximately the same time, the diaphragm develops centrally from the septum transver-sum and peripherally from the right and left pleuroperitoneal membranes (Shrestha et al., 2014). Normally the pleuroperitoneal cavity is closed during the sixth and seventh week of gestation. A small portion of proliferating hepatic tissues may grow into the thoracic cavity before the complete closure of the diaphragmatic membrane, and the defect in the fusion of the diaphragmatic membranes may allow the sequestration of the hepatic tissue. Accordingly, the supradiaphragmatic liver appears with regression or atrophy of connection to the abdominal liver. Another possibility could be the development of an entirely different liver bud independent of the main hepatic diverticulum with no prior connection (Mendoza et al. 1986). This mechanism might explain the pathogenesis of the supradiaphragmatic liver with no pedicle into the liver proper.

Another explainable mechanism for the minority of cases reported in the literature was associated with previous trauma history (An et al., 2010). According to some reports, the most plausible explanation was that the fragment of the liver parenchyma was introduced into the thoracic cavity during the previous trauma, followed by regeneration and replace-ment of a nodular mass (Chen et al., 2014). This mechanism seems to be more likely in middle-aged or old patients with no diaphragm and liver abnormalities in their childhood and young adulthood, who underwent later traumatic injury on the lower chest or/and upper abdomen. We failed to detect the reason for the presence of this abnormality in our case.

Based on our researches, this report describes an intrathoracic ectopic liver, which might have been induced by a congenital abnormality in the dog.

There are few case reports of an intrathoracic ectopic liver in veterinary medicine. To our knowl-edge, this is one of the rare incidence of this anomaly in dogs. This anomaly has not been recognized as a severe clinical problem.