BACKGROUND: Cancer as a global problem is a major health threat to human, and lung cancer is the most com-mon type of malignant tumor. Phenethyl ester of caffeic acid is one of the known phenolic compounds. The beneficial effects of caffeic acid, including its anti-inflammatory, antiviral, immune-boosting, antioxidant and car-cinostatic and anticarcinogenic properties have been confirmed in several studies. Matricaria chamomile that belongs to the Asteraceae family is one of the most popular medicinal plants, which is known as the "star" of me-dicinal plants. It has been used for the centuries for its anti-inflammatory, antimicrobial and anti-cancer properties.

OBJECTIVES: The aim of this study was to evaluate the induction of apoptosis in A549 lung cancer cells by caffeic acid obtained from propolis and chamomile extract.

METHODS: The A549 cultured lung cancer cells were treated with caffeic acid and chamomile extract. Following incubation times the cells were examined by flow cytometry for the rate of apoptosis induction.

RESULTS: The results showed that caffeic acid and chamomile extract have effective roles in inducing apoptosis and caused significant changes in the percentage of living cells and the percentage of cells in the early and late phases of apoptosis.

Today, due to the global spread of the coronavirus, less attention is being paid to other diseases, but in epidemics, people with debilitating diseases, such as those with cancer, are at greater risk. And still one of the biggest human problems is the treatment of different types of cancer.

Non-small cell lung cancer is the most common type of lung cancer, and chemotherapy with limited efficacy is the only possible way to provide short survival. Finding the right drugs to treat different types of cancer is a long-term challenge (Chakraborty & Rahman, 2012; Chao et al., 2021). Numerous treatments are available for the cancer therapy but they are restricted for the lack of specificity and dose-limiting toxicity (Bayat Mokhtari et al., 2017). Poor prognosis can occur due to the proliferation of medical resistance in cancer cells (Haga, W, & S, 2018; Lu et al., 2021).

Caffeic acid phenethyl ester (CAPE) is one of the known phenolic compounds that can be separated from propolis (Zaeemzadeh, Hemmati, Arzi, Jalali, & Rashidi, 2011). Caffeic acid (3, 4-dihydroxycinnamic acid) (Figure 1) which is present in many foods, and especially in coffee has beneficial effects, including anti-inflammatory, anti-viral, immune-stimulating, antioxidant, and carcinostatic and anticarcinogenic properties, which have been confirmed in numerous studies (Orsolic, Kunstic, Kukolj, Gracan, & Nemrava, 2016; S. Patel, 2016; Kalthoff et al., 2020). 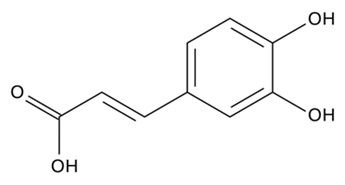 Matricaria chamomile is a member of the Asteraceae family. This plant is very popular among medicinal plants used all around the world and is also known as the "star" of medicinal plants. It has been used for the centuries for its anti-inflammatory (Miguel et al., 2015), antimicrobial (Danciu et al., 2021), anti-diarrhea (Sebai et al., 2014), antioxidant (Zemestani, Rafraf, & Asghari-Jafarabadi, 2016), anti-allergic (Lundh et al., 2020) and anti-cancer properties (D. Patel, Shukla, & Gupta, 2007). Matricaria chamomile contains flavonoids mainly apigenin, luteolin and flavonols (Guzelmeric, Vovk, & Yesilada, 2015). A549 cells are adenocarcinomic human alveolar basal epithelial cells and constitute a cell line that was first developed in 1972 by D. J. Giard, et al. through the removal and culturing of cancerous lung tissue in the explanted tumor of a 58-year-old caucasian male (Giard et al., 1973).

Despite being developed as a tool for the cancer research, this cell line was consequently characterized as a representative of the Alveolar Type II pneumocytes of the human lung and that is why this cell line has been a mainstay of respiratory research for nearly forty years (Cooper et al., 2016).

The A549 cells have been well characterized over the years and are valuable for the routine in vitro and in vivo experimental models (Kaplan, Akalin Ciftci, & Kutlu, 2017). These cells are squamous in nature and are responsible for the diffusion of substances such as water and electrolytes across the alveoli of the lungs. The A549 cells are human alveolar basal epithelial cells that grow adherently as a monolayer in vitro and serve as suitable transfection hosts. It has been documented that A549 cells are pRB-positive (L. Li et al., 2018; Niculescu et al., 1998) and express wild-type p53 (Rom & Tchou-Wong, 2003).

Apoptosis is defined by a set of physically and generally observable features associated with the cell death that is one of the most common forms of cell death during the growth of a living organism (Zhao et al., 2019). It also plays an important role in cancers (Shivapurkar, Reddy, Chaudhary, & Gazdar, 2003). An enzyme called caspase initiates a chain reaction of the cascade changes that eventually leads to the apoptotic cell death (Zhang et al., 2017). In a normal cell, caspases are inactive, but when the cell is under stress or prepared for the programmed death these enzymes are activated and begin to break down certain proteins inside the cell to start the process of apoptosis (J. Li & Yuan, 2008; Schmaltz, Hardenbergh, Wells, & Fisher, 1998).

The A549 cell lines were obtained from the National Center for Genetic and Biological Resources of Iran. Cells were cultured in Dulbecco’s modified Eagle’s medium (DMEM; DNAbiotech., IRAN) supplemented with 10% fetal bovine serum (FBS), 1% penicillin, and 100 µg/mL streptomycin (DNAbiotech., IRAN) and incubated at 37°C in a humidified atmosphere containing 5% CO2. At about 70-90% confluency, cells were trypsinized, pelleted and reseeded at a concentration of 5×105 to 1×106 cells in 20 ml complete cell culture medium per T75 flask (equaling 2.5×104 cells/mL to 5×104 cells/mL).

The 3- (4, 5-dimethyl-2-thiazyl) -2, 5-diphenyl-2H-tetrazolium bromide (MTT) and propidium iodide (PI) used in this study were obtained from DNAbiotech Company. The rest of the materials and reagents were purchased from Sigma Company.

The A549 cells were seeded in a 96-well plate (1×103 cells/well). After 24 hours incubation, the cells were exposed to different concentrations of caffeic acid (10, 25, 50 µM) and chamomile extract (20, 40, 60 µM) for 24, 48 and 72 hours. After the incubation times, MTT was added to the wells at a concentration of 0.5%. Following 4 hours incubation in dark, DMSO was added to the wells (100 µl/well) to dissolve the formazan crystals. The plate was then shaken for 10 minutes on a shaker to ensure the complete dissolution. In the next step, the viability of the cells was measured by reading the absorbance at 570 nm using a 96-well BIO-TEK plate reader.

The cells were analyzed using PI staining method. Confirmation of the presence of fragmented DNA indicated apoptosis in the cells in the sub-G1 phase.

After treating A549 cells with caffeic acid for 48 and 72 hours and Matricaria chamomile extract for 24 and 48 hours, all cells were washed twice using PBS and then fixed with 80% methanol and kept at -20°C freezer. After 24 hours, the cells were pelleted and resuspended in PBS and incubated at room temperature for 1 hour by adding 0.2 mg/mL RNaseA and 2% Triton X-100. PI was added at a concentration of 10 μg/mL and incubated in dark for at least 18 hours. Flow cytometry was performed using a Becton Dickinson FACSCalibur cytometer with argon ion laser (488 nm) as the excitation source. FlowJo software (version 7.6.1) was used for the DNA content analysis.

Data of independent experiments performed in triplicate were expressed as mean ± standard deviation (SD). The data were examined by one-way ANOVA followed by Duncan's test. In all comparisons, P-value<0.05 was considered to indicate the statistical significance.

Based on the data obtained, the appropriate 50% inhibitory concentrations (IC50) were determined at 25 and 40 µM for caffeic acid (Figure 2) and Matricaria chamomile (Figure 3) extract, respectively. 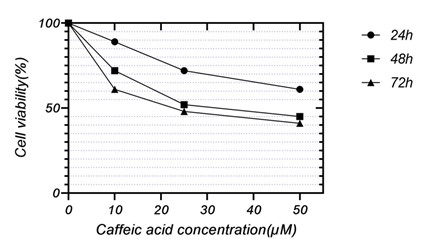 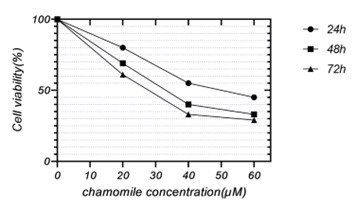 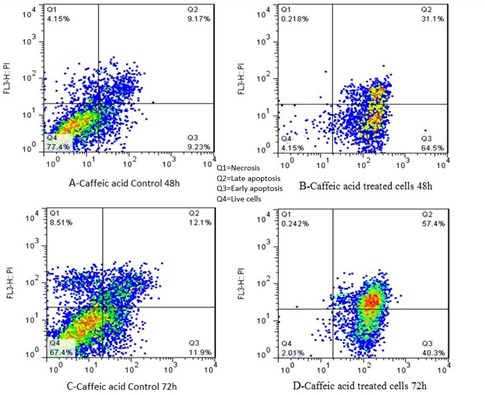 Figure 4. Apoptosis detection in caffeic acid-treated cells. The graphs show the changes of the apoptosis rate in A549 cells after exposure to caffeic acid (25 µM) in two time periods of 48 hours (A, B) and 72 hours (C, D) 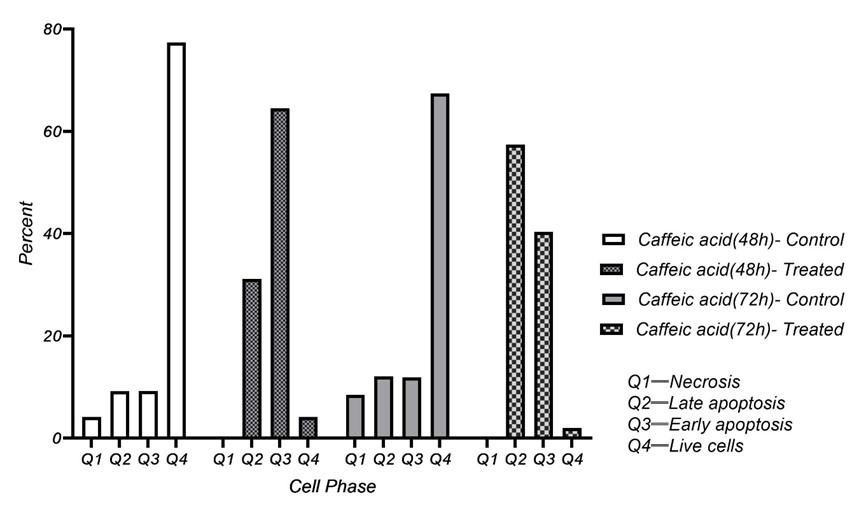 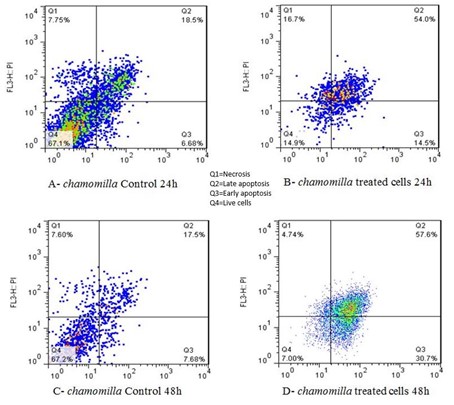 Figure 8. Apoptosis detection in chamomilla -treated cells. The graphs show the changes of the apoptosis rate in cells after exposure to chamomilla (40 µM) in two time periods of 24 hours (A, B) and 48 hours (C, D) 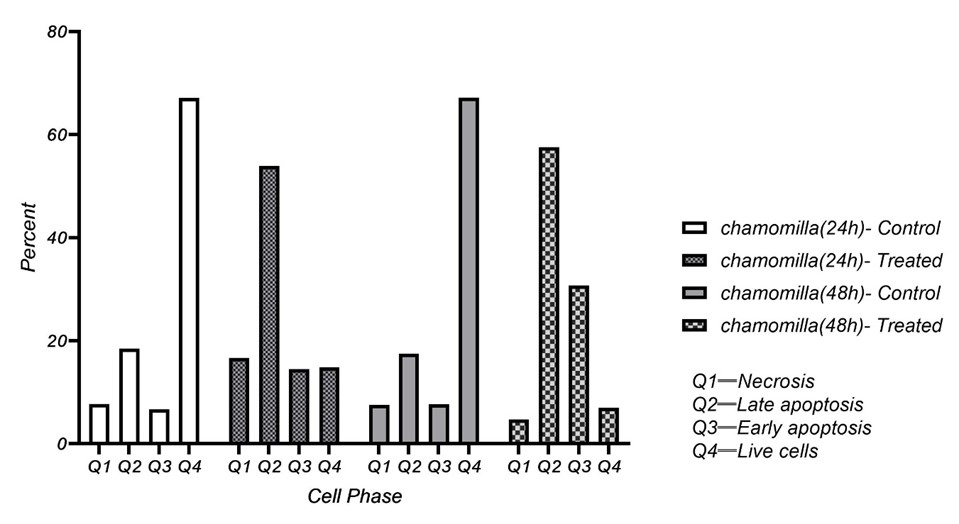 The results of flow cytometry and data analysis at the end of the 48-hour period showed that the rate of apoptosis in caffeic acid-treated cells was significantly higher than the control group, so that the amount of cells measured in phase Q4 (Live cells) decreased from 77.4% in the control sample to 4.15% in the samples treated with caffeic acid. In contrast, the comparison of the cells in phase Q3 (early apoptosis) showed an increase in this phase from 9.23% in the control group to 64.5% in the cells treated with caffeic acid. This means that caffeic acid has a certain induction effect on A549 cell line apoptosis.

The results of 72-hour samples were similar and confirmed the 48-hour treatment data, so that the amount of cells measured in phase Q4 decreased from 67.4% in the control sample to 2.01% in the samples treated with caffeic acid. Comparison of Q3 phase cells (early apoptosis) showed an increase in this phase from 11.9% in the control group to 40.3% in caffeic acid-treated cells. Another noteworthy point is that caffeic acid-treated cells in Q2 phase showed higher values at 72 hours than 48 hours treatment, which means that more cells enter the late apoptosis phase over the time.

The results of 48-hour samples were completely similar to the 24-hour period and the amount of cells measured in phase Q4 decreased from 67.2% in the control sample to 7.0% in the samples treated with Matricaria chamomilla extract. This means that Matricaria chamomilla similar to caffeic acid has a certain apoptosis induction effect on A549 cell line.

Today, the use of medicinal plants and the natural substances has received more attention than chemical drugs due to the lower side effects (Marder et al., 1998; Shokrzadeh, Parvaresh, Shahani, Habibi, & Zalzar, 2013). Our results showed a strong antitumor effect for the caffeic acid.

This study showed that chamomilla and caffeic acid both have significant apoptotic effects on pulmonary epithelial cancer cells (A549) and have the ability to induce cell death in the lung cancer cells. These substances have the capacity to study more deeply. It is hoped that in the future these substances will be used as a new combination drug in the treatment of cancer.

This article was extracted from the thesis prepared by Raham Mojibi to fulfill the requirements of the PhD degree. The authors acknowledge the staff of Mycology department and Faculty of Immunology department of University of Tehran, and the Central laboratory of Tehran University.