BACKGROUND: Ascertainment of fetal sex is important in the equine industry for economic reasons. As a result, various methods have been developed for the sex determination of a fetus in a horse; however, the current techniques have some limitations. Recently, evaluation of maternal testosterone concentration has been suggested as an easy and inexpensive method for diagnosing fetal sex, but the findings are discrepant in different species.

OBJECTIVES: The aim of the present study was to measure the concentration of circulating testosterone in mares carrying male and female fetuses in order to assess the diagnostic value of maternal testosterone concentration for sex determination of equine fetus.

METHODS: Blood samples were collected from mares (n=20) at months three, six, and nine of pregnancy. The samples were centrifuged and stored at -20°C until hormonal analysis of testosterone concentration using an ELIZA kit. The gender of foals was determined at birth based on observation of external genitalia.

Given the significance of foal gender in the equine industry, various methods have been developed to ascertain the sex of the fetus during pregnancy (Busato et al., 2021). In this context, ultrasonography could be used to diagnose fetal sex during gestation, but the period for application of ultrasonography is limited and could not be used throughout pregnancy (Busato et al., 2021). Furthermore, analysis of cell-free fetal DNA in maternal circulation has been successfully used to determine fetal sex; however, this technique requires special equipment, which restricts its usage in the equine industry (de Leon et al., 2012).

Therefore, the present study was conducted to reexamine testosterone concentration in mares pregnant with male and female fetuses to elucidate whether maternal measurement of testosterone could serve as a diagnostic method for fetal sex determination in equines.

The present study was approved by Animal Ethics Committee at the University of Tehran in terms of animal welfare and ethics. The study was cross-sectional, in which blood samples were collected from 20 mares of ages (8.80 ± 1.38 years) and parities (including 7 nulliparous and 13 parous mares). To ease the statistical analysis of the effect of age on dependent variables, mares were divided into two age categories, including mares with ≤ 10 years old age (n = 12) and mares with > 10 years old age (n = 8). The mares were housed in a warm-blood horse farm in Qazvin province, Iran. Breedings were performed by a natural covering of mares using an individual stallion in the herd. Pregnancy diagnosis was implemented using rectal ultrasonographic examination 14 to 16 days after confirmation of ovulation by ultrasonographic examination. Given that breeding dates and pregnancy diagnosis were precisely recorded in the herd, the timepoints associated with the third, sixth, and ninth months of pregnancy could easily be determined for blood sampling in this study. The gender of the foal was ascertained at birth based on observation of external genitalia.

Blood samples were collected from the jugular vein of mares at the third, sixth, and ninth months of gestation. The samples were centrifuged for 15 minutes at 2000 rpm, and the resultant serum was maintained at -20°C until hormonal assessment. Testosterone was evaluated using an ELIZA kit (Roche Diagnostics, Mannheim, Germany) based on manufacturer instructions. The applied testosterone ELIZA kit's detection limit, intra-assay CV, and inter-assay CV were 12 pg/mL, 2.9 %, and 4.8 %, respectively.

Data associated with testosterone concentration were analyzed using the GLM procedure by a repeated measures model. Multiple comparisons were conducted using the LSMEANS statement. Data associated with the sex ratio of foals were analyzed using the GENMOD procedure, including function link logit in the model. All analyses were conducted in SAS version 9.4 (SAS Institute Inc., Carry, NC, USA). Differences were considered significant at P-value< 0.05. 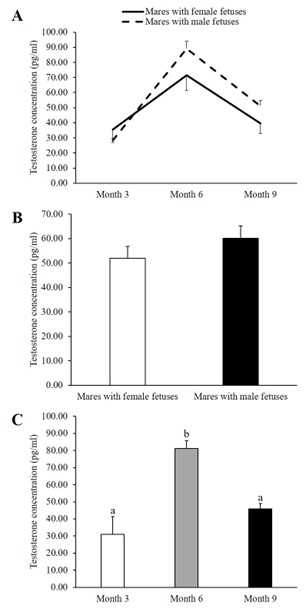 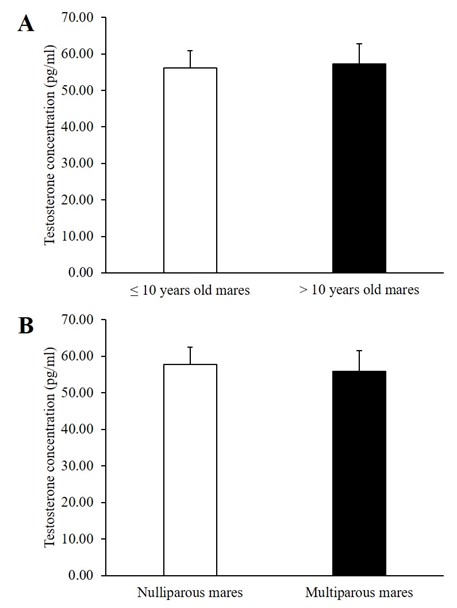 Table 1. Effect of age and parity of mares on the sex ratio of offspring. Values in parenthesis are actual numbers

Nevertheless, temporal dynamics of serum testosterone were observed over the course of gestation in mares as circulating testosterone elevated from month three to six of pregnancy and declined afterwards up to month nine. In this sense, it has been reported that the blood testosterone level increased in mares during pregnancy up to months seven and eight of gestation, at which circulating testosterone peaked (Silberzahn et al., 1984). Furthermore, Satué et al. (2019) revealed that maternal blood testosterone in pregnant mares initiated to increase in months two and three of pregnancy, plateaued between months four and six of pregnancy, decreased from month seven to nine of pregnancy, and experienced a peak in month 10 of pregnancy (Satué et al., 2019). On the other hand, Legacki et al. (2016) mapped alterations of steroid hormones during equine pregnancy using mass spectrometry. They reported that testosterone concentration ranged between 0.10 and 0.34 ng/ml from week 6 to 14 of gestation, but it was not debatable afterward (Legacki et al., 2016). Although all studies substantiated alterations of circulating testosterone in pregnant mares during gestation, the pattern of these changes seems to be discrepant among various studies, which might be due to the timepoints selected for blood sampling and/or the methodology and kits used for hormonal analysis.

Another interesting result of the present study was the effect of maternal age on fetal sex. It was found that younger mares were more likely to produce male offspring as compared with older mares. It should be noted that this effect of maternal age did not depend on the history of experiencing pregnancy. Moreover, the effect of a stallion on the fetal sex ratio has been reported previously (Gharagozlou et al., 2014), but in the present study, all investigated mares were bred by a single stallion, and so the effect of a stallion on sex ratio was not a confounding factor in this study. In line with present research findings, a study by Santos et al. (2015) showed that the percentage of males dwindled with the increase in the age of mares (Santos et al., 2015). Many changes in mares occur during aging, including changes in the development of ovarian follicles and oocytes (Ginther et al., 2008; Rambags et al., 2014; Rizzo et al., 2019), embryonic and fetal growth (Cuervo-Arango et al., 2018; Derisoud et al., 2021; Squires et al., 1999) and even the structure and function of the uterus (Ousey et al., 2012), which can be considered as potential influencing factors (Busato et al., 2021). Concerning potential contributing mechanisms, factors affecting the sex ratio of offspring could be divided into two categories of preconceptional and postconceptional determinants. With the former, androgens, estrogens, and the immune system of the female reproductive tract have been reported to the skewed sex ratio of offspring by impacting gametes and/or their interaction with oviduct (Almiñana et al., 2014; Emadi et al., 2014; Gharagozlou et al., 2016). With the latter, maternal body condition and glucose concentration have been observed to dimorphically affect the survival of male and female embryos, thereby impacting the sex ratio (Cameron et al., 2008). Nevertheless, the exact mechanisms underlying the effect of maternal age on the sex ratio of offspring warrants further studies to be deciphered.

The present study showed no significant difference in maternal testosterone concentrations between mares carrying male fetuses and mares carrying female fetuses at the third, sixth, and ninth months of gestation. Therefore, it appeared that evaluation of circulating testosterone in pregnant mares could not serve as a diagnostic method for determining fetal sex in horses.

The current research was supported by the University of Tehran (Grant number: 7508010/6/21). The authors would like to express their gratitude to the staff at the warm-blood horse farm (Qazvin, Iran) for their kind assistance.