1. Introduction
Atoxic neutrophil exhibits specific morphologic abnormalities on Romanowsky staining peripheral blood smears. During the maturation process or in association with certain diseases, some changes occur in the bone marrow. The most prominent cytoplasmic changes are Döhle bodies, basophilia, toxic granulation, and vacuolation. Nuclear changes and deviations in cell size and shape can also occur. Döhle bodies are seen in the neutrophils of healthy cats (Gori et al., 2021). In other species, Döhle bodies are seen in animals that exhibit signs of illness and represent toxic change. In neutrophils and their precursors, Döhle bodies are bluish and angular inclusions in the cytoplasm. These structures are retained aggregates of the rough endoplasmic reticulum (Harvey, 2017).
Döhle bodies are more sensitive in human and feline hematology than cytoplasmic vacuolation in diagnosing bacterial infections (Lima et al., 2010). Other researchers found that small and dotted-blue Döhle body-like inclusions are formed due to the accumulation of a rough endoplasmic reticulum or ribosomes and are seen in neutrophils in cats with no clinical signs of inflammation. These components appear to be a false secondary alteration due to prolonged or improper storage of the samples. Since toxic changes in the neutrophils of cats, including Döhle bodies, are clinically significant, it is necessary to know about pre-analytical factors such as storage time and temperature that may cause artificial changes and misdiagnosis of true toxic changes (Aroch et al., 2005). This study aimed to determine the effects of time and temperature on developing Döhle or Döhle-like cytoplasmic inclusions in the neutrophils of clinically healthy cats.
2. Materials and Methods
The study protocol was approved by the local animal Research Ethics Committee at Semnan University of Veterinary Medicine. Informed consent (verbal or written) was obtained from the owner or legal custodian of all animals described in this work for the procedures undertaken.
Eight clinically healthy male cats (DSH and Persian, 4 of each breed with an age range of 2 to 4 years) without any clinical history of anemia and inflammation were selected from cats referred to the Semnan University Veterinary Teaching Hospital (SUVTH) for this study. Two milliliters of blood samples for complete blood count were obtained in potassium EDTA-containing tubes (Non-vacuum K2 EDTA, FAR TEST, IRAN), and examinations were performed within 15 minutes of sample collection (to avoid EDTA storage artifacts) by Celltac α MEK-6500K analyzers (Nihon Kohden) for the use of the most common animal
types, like dog, cat, cow, and horse.
One blood smear for differential leukocyte counting and morphologic evaluation was prepared immediately after blood collection and considered baseline time (T0). Three Eppendorf tubes were considered for each temperature, and 150µL of blood was added to each tube. Blood smears were prepared from tubes stored at RT (22°C±3°C) and refrigerator temperature (4°C) after 2, 8, and 24h, and they were stained with Giemsa. There were 56 blood smears (6 blood smears per cat for 2, 8, and 24h and one smear was also prepared for time zero). Each blood smear was evaluated to determine Döhle bodies or Döhle body-like inclusions.
Döhle body-like inclusions are defined as a small dotted, intra-cytoplasmic inclusion of light blue-gray color (Boudrax et al., 2010). Döhle bodies were considered larger intracytoplasmic inclusions, light blue-gray, elliptic to amorphous (Takeuchi et al., 2010) counted as 100 neutrophils per slide, and the percentage of neutrophils with Döhle or Döhle-like cytoplasmic inclusions was recorded.
Statistical analysis was done by SPSS software. First, to normalize the data distribution, their logarithm was calculated. Then the results of the percentage of neutrophils with Döhle body-like inclusions or Döhle bodies between two groups of temperature storage (RT and 4°C) and for each storage period (2, 8, and 24 h) were compared by linear trend repeated measures. The Benjamini-Hochberg method was used to correct the 5% alpha level for multiple pairwise comparisons, and P values less than 0.001 following the correction of the 5% alpha level were considered statistically significant.
3. Results
Neutrophils with Döhle (Figure 1) or Döhle-like cytoplasmic inclusions (Figure 2) were observed in most blood smears. 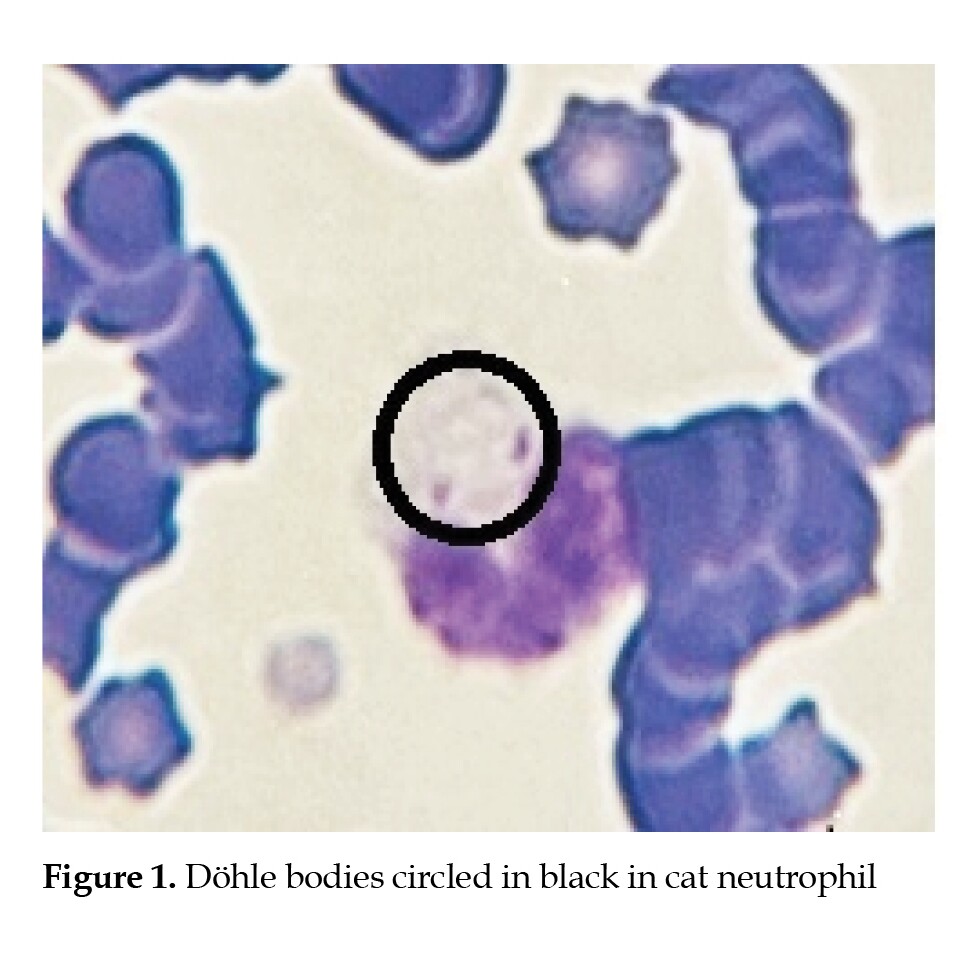 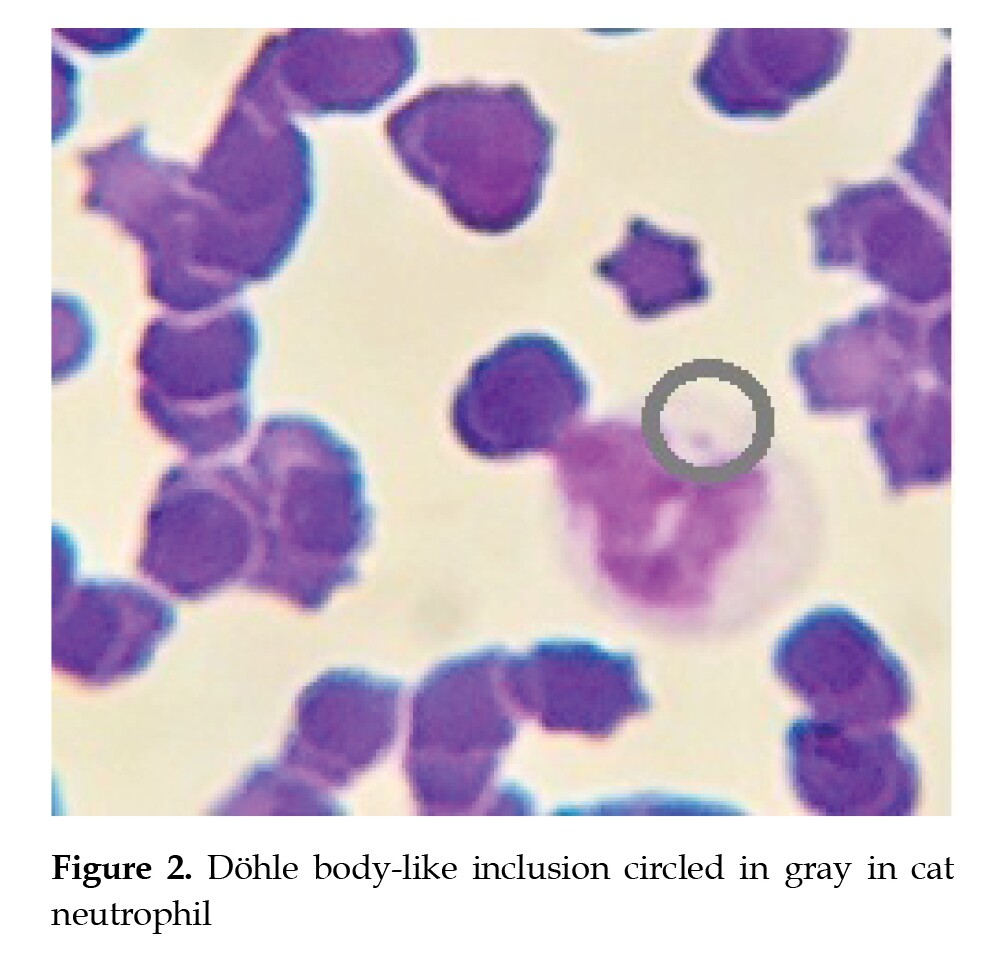 The blood smear examination of all cases, except for cases 1 and 4, prepared from blood stored at RT, showed that the percentage of neutrophils with Dohl or Dohl-like inclusions after 24h was more than 8h (Figure 3).

Since the actual toxic change in bone marrow neutrophils occurs before diffusion into the peripheral blood (Takeuchi et al., 2010), the nature of the Döhle body-like inclusions observed in the present study is uncertain. The inclusions are thought to result from accumulated rough endoplasmic reticulum or ribosomes over time, in which case the cells become more permeable to staining, either due to the staining of previously invisible organs or the destruction of existing organs. Evaluation of these smears by electron microscopy can significantly help clarify their origin. Blood smears assessment to evaluate toxic neutrophil changes is a cheap, fast, simple, and accessible process that indicates the infectious and metabolic diseases in cats. Observation of toxic neutrophils is a significant diagnostic finding and an aid in patient evaluation, disease course, length of hospital stay, and treatment planning. In cats, unlike dogs, toxic neutrophils are not associated with higher mortality (Gori et al., 2021). Various reports have shown time- and temperature-dependent changes in erythrocytes, white blood cells, platelets, and automatic and manual CBC markers in cattle (Ihedioha et al., 2007), laboratory animals, dogs, sheep, goats, horses, turkeys, and sea lions (Hadzimusic et al., 2010). The time delay between sampling and analysis is when blood samples are sent to reference laboratories or when the analysis cannot be performed easily, affecting the quality of the analysis. Ameri et al. (2011) found that although most changes in the blood tests of monkeys, rabbits, mice, and rats were clinically insignificant when the sample was stored at 4°C, the best way to test the blood of these animals is to process the blood promptly, preferably 1 hour after blood collection. In the present study, no other toxic changes, such as basophilic cytoplasm and foamy vacuolation, were observed in feline neutrophils. Perez-Ecija et al. (2020) found that increased basophilia and foamy vacuolation of the neutrophil cytoplasm in the smears within 1 hour of blood collection indicated inflammatory disease in donkey blood. Regarding the slight increase in foamy vacuolation that occurs over time in EDTA, the prominence of moderately vacuolated neutrophils in the smears that occur a few hours after blood collection is questionable. Though, moderate or severe foamy vacuolation should be considered clinically.
5. Conclusions
Based on the current study, morphological changes in neutrophils of healthy cats developed in vitro in addition to Döhle or Döhle-like cytoplasmic inclusions, including low foamy vacuolation, without cytoplasm basophilia, which were different from neutrophils are associated with severe inflammation. Therefore, determining and interpreting toxic changes in cat neutrophils are affected by storage conditions and time. Hence, it is suggested that a freshly prepared blood sample be sent to the laboratory immediately after blood sampling with a blood sample stored at 4°C. It is also recommended that the time and date of the blood sampling be clearly stated on the submitted samples.