Prevalence and Antibiotic Resistance Pattern of Mannheima haemolytica and Pasteurella multocida Isolated from Cattle Lung Samples from an Industrial Abattoir: A Study from Northeastern Iran

BACKGROUND: Bovine respiratory disease (BRD) is still one of the most important infectious diseases in dairy farms. Pasteurella multocida and Mannheimia hemolytica are the main bacterial pathogens of BRD.

OBJECTIVES: This study aimed to determine the prevalence and pattern of antibiotic resistance of M. hemolytica and P. multocida isolated from lung samples of cattle slaughtered in an industrial abattoir in Golestan province, northeastern Iran.

METHODS: Samples were taken from diseased and normal-appearing lungs of cattle slaughtered in an industrial abattoir. The samples were processed bacteriologically for the isolation of both Pasteurellaceae species. The isolates were identified by cultural and biochemical tests, and polymerase chain reaction (PCR) technique. Antimicrobial susceptibility of the isolates was determined using the Kirby–Bauer disc diffusion method.

RESULTS: A total of 120 samples were collected. The bacteriological examination of the samples resulted in the isolation of 36 (30%) M. hemolytica and P. multocida strains. Of the isolates, 14 (11.6%) and 22 (18.3%) were positive for P. multocida and M. hemolytica, respectively. Clear difference was observed between the populations of M. haemolytica recovered from apparently healthy lung tissues versus pneumonia samples. All the isolates were susceptible to tulathromycin, and the highest resistance was observed to penicillin and erythromycin. Multiple drug resistance was observed in both Pasteurellaceae species.

CONCLUSIONS: The results highlight the importance of continued surveillance of BRD pathogens in monitoring their antibiotic resistance patterns to update treatment protocols. Surveillance studies are also necessary to develop policies for limiting the spread of resistance.

Bovine respiratory disease (BRD) is still one of the most important infectious diseases in dairy farms. It is the main cause of economic loss due to animal death, low milk yield, reduction in weight gain and growth rates, as well as an increase in therapeutic costs and other economic measures (Nefedchenko et al., 2019). The economic burden of the disease is estimated to be around $1 billion in the United States alone (Lubbers & Hanzlicek 2013). Environmental stressors such as climate change, change in feed or housing, or transportation makes animals more susceptible to BRD caused by viral and bacterial agents (Hodgins et al., 2002). Pasteurella multocida, Mycoplasma bovis, Histophilus Somni, Arcanobacterium pyogenes, and Mannheimia hemolytica are considered as BRD bacterial pathogens. These commensal bacteria colonize bovine nasopharynx and cause infection when cattle are under stress (Confer AW, 2009).

In treatment of BRD in large commercial farms, the focus is on treating sick animals using metaphylactic antimicrobial therapy. The sick animals that do not respond to initial treatments are usually treated with another antimicrobial drug. Recently, treatment strategies for BRD have been investigated due to the observed antimicrobial resistance, especially multiple drug resistance (MDR) in isolates from cattle (Noyes et al., 2015).

Due to the limited data, this study aimed to determine the prevalence and pattern of antibiotic resistance of M. hemolytica and P. multocida isolated from lung samples of cattle slaughtered in an industrial abattoir in Golestan province, northeastern Iran.

For this cross-sectional descriptive study, the lung samples were collected randomly from the cattle slaughtered in an industrial abattoir in Golestan province. Each sample was separately placed in a sterile ziplock plastic bag and transferred to the laboratory of Microbiology, Islamic Azad University, Gorgan Branch, not later than 2 hours after the animal`s death and stored cool not more than two days at 4oC until examination. From diseased samples, samples of 2-3 cm3 were taken from cranioventral lung lobes showing hyperemia, rough surface, and consolidation symptoms.

After homogenizing the samples in a sterile physiological solution, the suspension was cultured on blood agar supplemented with 5% defibrinated sheep blood and incubated at 37°C for 24 h. The colonies showing the morphology of M. haemolytica (white-grayish, medium-sized round, non-mucoid, and β-hemolytic) and P. multocida (non-hemolytic, greyish, medium-sized round, and non-mucoid) were selected. The suspicious colonies were streaked on blood agar and McConkey agar and incubated at 37°C for 24 h. Afterwards, the samples were tested for catalase and oxidase production and Gram staining reaction. In addition, TSI, SIM, urea agar, MRVP, nitrate, gelatin, simmons citrate agar, and culture media containing sugars such as glucose, arabinose, mannose, trehalose, ONPG, and NPG were used to identify the microorganisms. The cultures were incubated at 37°C for 24 h (Khalili et al., 2016; Nefedchenko et al., 2019). A narrow zone of hemolysis and growth on McConkey agar plate but unable to produce indole, was considered M. hemolytica (Al-Haj Ali and Al-Balla, 2019). While Gram-negative coccobacilli, catalase, oxidase and indole positive and citrate utilization, methyl red and VP tests, gelatin hydrolysis negative that did not grow on McConkey agar with no hemolysis on blood agar were considered P. multocida (Khamesipour et al., 2014).

Preliminary identification of the isolates was carried out by standard cultural and biochemical tests. PCR assay was used to confirm the isolates. The bacterial isolate was inoculated into the brain-heart infusion (BHI) broth and incubated at 37°C for 18-24 h. Genomic DNA was extracted from the isolated overnight culture using Geno Plus TM Genomic DNA Extraction Miniprep System (Viogene, China). The quality and quantity of the extracted DNA were determined by agarose gel electrophoresis (1%). The primers used to detect the species are displayed in Table 1 (Rawat et al., 2019).

Using the Kirby-Bauer disk diffusion method, the antimicrobial susceptibility testing of the isolates was performed according to the Clinical and Laboratory Standards Institute (CLSI, 2018) guidelines. The plates were incubated at 37°C for 18 h, and the results were interpreted after measuring the inhibition zone against each of the isolates. The antimicrobial agents (purchased from Padtanteb Company) including ceftiofur (30 μg), enrofloxacin (5 μg), florfenicol (30 μg), oxytetracycline (30 μg), spectinomycin (10 μg), tilmicosin (30 μg), tulathromycin (30 μg), erythromycin (30 μg), cotrimoxazole (1.25 μg), streptomycin (30 μg), ampicillin (30 μg), and penicillin (10 μg) were used in this study. The results were interpreted as resistant (R), intermediate (I), and susceptible (S) according to the criteria provided by the CLSI. Escherichia coli ATCC 25922 was used as the quality control strain for the interpretation of results (provided from Tehran University, Faculty of Veterinary Medicine).

Differences in the bacterium isolation were determined by Chi-square test, and P-value≤0.05 was considered significant.

A total of 120 lung samples, including apparently healthy (n=60) and those containing hepatization and consolidation in cranioventral lobes (n=60), were collected randomly from an industrial slaughterhouse in Golestan province during April to September 2020. The bacteriological examination of the samples resulted in the isolation of 36 (30%) M. hemolytica and P. multocida strains that were further confirmed by PCR technique. Of the isolates, 14 (11.6%) and 22 (18.3%) were positive for P. multocida and M. hemolytica, respectively. Eleven apparently healthy lungs were positive for both bacteria (Table 2). Significant difference was observed between the populations of M. haemolytica recovered from apparently healthy lung tissues versus diseased samples (P≤0.05), while no significant differences were found between the populations of P. multocida.

In addition, other bacterial species such as Staphylococcus aureus, Staphylococcus epidermidis, Streptococcus pneumonia, and E. coli were isolated and identified according to the phenotypic characteristics and biochemical tests. 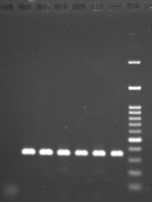 According to the antimicrobial results, all the isolates were susceptible to tulathromycin, and the highest resistance was observed to penicillin and erythromycin. The sensitivity rates for M. haemolytica were between 31.8% (to penicillin, ampicillin, and erythromycin) and 100% (to tulathromycin), whereas sensitivity of the P. multocida isolates ranged from 28.5% (to erythromycin) to 100% (to tulathromycin, florfenicol, and tilmicosin). In a study conducted by Sebbar et al. (2019), the sensitivity rates of M. haemolytica to erythromycin and streptomycin were in line with our findings (Sebbar et al., 2019). In the present work, all the isolates were susceptible to tulathromycin while in a study by Timsit et al. (2017), high levels of resistance (>70%) to tulathromycin were reported in M. haemolytica and P. multocida isolates (Timsit et al., 2017). In our study, high resistance rate was observed to erythromycin (55.5% of the isolates) that was in agreement with the result of Anholt et al. (2017). In the current study, the ampicillin resistance rate was 54.5% for M. haemolytica, whereas it was reported 6% by Cassidy et al. (2014). In a similar study, the sensitivity rates of P. multocida to enrofloxacin and erythromycin were in line with those of our study (Khamesipour et al., 2014). Moreover, in a study carried out in Russia, the prevalence of antimicrobial resistance of M. haemolytica to ampicillin, streptomycin, and enrofloxacin was the same as our findings (Nefedchenko et al., 2019). In India, the resistance rates to penicillin, oxytetracycline, and streptomycin for both pathogens were similar to our findings (Sahay et al., 2020). Similarly, in a study from Mashhad, more than 90% of the M. haemolytica tested were susceptible to florfenicol (Mohammadi et al., 2006). In contrast to the present study, all P. multocida strains isolated from cattle and buffalo from Ahwaz were sensitive to cotrimoxazole (Gharibi et al., 2017).

In most studies including ours, high resistance rates of M. haemolytica to ampicillin and penicillin have been reported, whereas in a study from Mexico City, all the M. haemolytica strains were susceptible to these antimicrobials (Samaniego et al., 2011).

As seen here, the prevalence and antibiotic resistance pattern of M. haemolytica and P. multocida significantly varied in different studies. These differences may be due to the changes in climate, season, breeding, commercial practices, treatments, and management strategies of infected cattle (Ghadrdan Mashhadi et al., 2009).

In summary, the prevalence of M. haemolytica was more than that of P. multocida in the lung samples obtained from the apparently healthy and diseased cattle. In addition, clear difference was observed between the populations of M. haemolytica recovered from apparently healthy samples versus diseased samples. All the isolates were susceptible to tulathromycin, and the highest resistance was observed to penicillin and erythromycin. MDR was observed in both Pasteurellaceae species.

For the veterinarians, the results highlight the importance of constant monitoring of antibiotic resistance patterns of BRD pathogens to update treatment protocols. Surveillance studies are also necessary to develop strategies for limiting the spread of resistance.

This study was extracted from a dissertation performed by Fatemeh Ashrafi for a Master of Science degree in Microbiology. The Department of Microbiology, Islamic Azad University, Gorgan Branch is acknowledged for providing necessary laboratory facilities.

The authors declared no conflicts of interest exist.