Determination of stress oxidative and antioxidant in liver
The isolated sections of the liver were immediately washed in ice-cold saline. It is then homogenized in potassium phosphate 50mM (pH=7.4) and reaches a concentration of 10%. They were then centrifuged at 4000 rpm for 15 minutes at 4°C. The obtained supernatant is used to measure spectrophotometrically and ELISA applying commercial kits based on the manufacturer’s instructions.
Statistical analysis
All data were presented as Mean±SEM and analyzed in SPSS software, version 26. Variance comparisons between the means of the control and experiment treatment data were made by 1-way ANOVA. Tukey’s post hoc test was used to compare the median of each group. The difference in mean values among the groups and histological analysis was studied utilizing a nonparametric test. P≤0.05 was regarded as significant.
3. Results
Effects on MDA Levels
MDA level in the liver was considerably higher in the IONPs groups (48%) compared to the control (P≤0.05). The administration of spirulina with IONPs for 60 days considerably decreased the levels of MDA in the liver compared with the IONPs alone group, which means its protective and healing impacts (Figure 1). 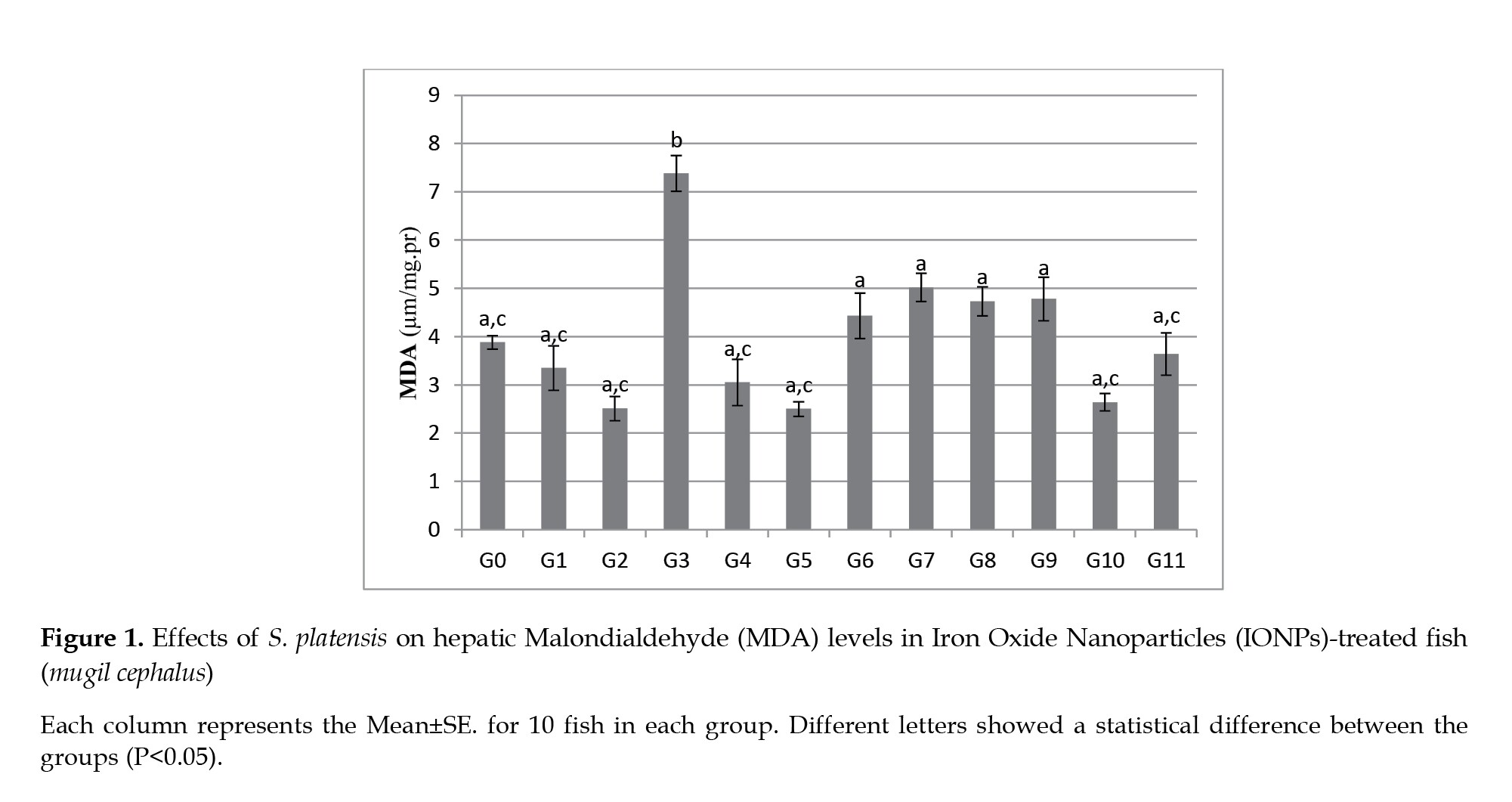 Histopathological changes
The histopathology of the livers in the control group was normal (Figure 5a).

Liver sections of animals treated with IONPs for 3 days, revealed a rise of the melanomacrophage centers and hyperemia (Figure 5b), which was more severe in the 60-day group (Figure 6a) (Figures 6b, 7a).

A substantial degree of vacuole degradation was detected in several samples (Figure 7a, 7b).

It is interesting to note that S. platensis therapy stopped the histopathological changes caused by IONPs. Lesions seen in the livers of S. platensis plus IONPs intoxicated animals were much less than those seen in the IONPs alone group (Figure 8a, 8b).

The severity of the liver lesions seen in the gray mullet’s liver after various treatments are shown in Table 1.

Funding
The paper was extracted from the PhD dissertation of the first author, Department of Basic Sciences, Faculty of Veterinary Medicine University of Tehran.
Authors' contributions
All authors equally contributed to preparing this article.
Conflict of interest
The authors declared no conflict of interest.
Acknowledgments
This research was supported by University of Tehran. We thank Chabahar Maritime University and the Department of Marine Biology for their help and support.

Garner, K. L., & Keller, A. A. (2014). Emerging patterns for engineered nanomaterials in the environment: A review of fate and toxicity studies. Journal of Nanoparticle Research, 16, 2503. [Link]