Evaluation of Some Aflatoxins in Feed Ingredients of Livestock and Poultry by HPLC Method, A Local Study in Kermanshah Province

BACKGROUND: Mycotoxins are secondary metabolites produced by fungi, especially Aspergillus spp, on grains and animal feeds. The most important mycotoxins are aflatoxins, including aflatoxin B1, B2, G1, and G2.

OBJECTIVES: The present study was conducted to determine the occurrence of aflatoxins (B1, B2, G1, and G2) in the feed ingredients of livestock and poultry and to evaluate the effect of the season and spatial variation on aflatoxin contamination.

METHODS: Ninety-three feedstock samples were collected from three major factories in Kermanshah province, Iran, during four seasons. The samples were analyzed by HPLC, and values for aflatoxins were determined. The sum of the aflatoxins was determined as the total for each sample. Data were analyzed using the SPSS software version 23 using general linear model (GLM) based on complete block design (samples and seasons).

CONCLUSIONS: The aflatoxin B1 levels in animal feed were found higher during rainy seasons compared to the summer season. The aflatoxin B1, carried over from feed to livestock and poultry products in different seasons, may cause high contamination in livestock and poultry products at levels over the tolerance limit. Therefore, continuous surveillance of aflatoxins is required in animal feeds to reduce animal and consequently human exposure

Mycotoxins and aflatoxins contaminate more than 25% of the agricultural products and as a result a lot of economic losses occur. These toxins cause damage to agricultural products worldwide each year (de Oliveira et al., 2014; Gummadidala et al., 2019). Mycotoxins and aflatoxins are responsible for many different toxic effects on both animal and human species and are considered the most dangerous problem for feed and food (Faghihi et al., 2019; Serdar et al., 2020). Aflatoxins are toxic secondary metabolites produced by two species of the Aspergillus genus, including Aspergillus flavus, and Aspergillus parasiticus (Escrivá et al., 2015). There is a growing concern regarding the recurrent observation of aflatoxins in the milk and animal products (Khadivi et al., 2019). Aflatoxins are metabolites produced by the growth of fungi on foodstuffs, which may occur during the food storage and food processing (Chiewchan et al., 2015; Karlovsky et al., 2016). They contaminate a wide variety of foods and mixed foods. Studies show that mycotoxins and aflatoxins are mostly found in cereals (Hernandez-Martinez et al., 2010). Aflatoxins have adverse effects on growth performance, blood profiles, hepatic histopathology, intestinal morphology, relative weight of digestive organs, activity of digestive enzymes, and biochemical index of intestinal development in animals (He et al., 2013; Feng et al., 2017). Chronic aflatoxin poisoning in farm animals seems to weaken the immune system, impairing the metabolism of proteins and vital substances in the body. These compounds have toxic, carcinogenic, and mutagenic properties (Sirajudeen et al., 2011; Kumar et al., 2017; Theumer et al., 2018). Intake of feeds contaminated with aflatoxins in the long-term exerts adverse effects on the organs, including liver tissue injury and immune disorders (Fan et al., 2015). The consumption of aflatoxin-contaminated foodstuffs by humans and animals in unauthorized or continuous amounts can cause acute or chronic poisoning and cancer (Authority 2013; Ostry et al., 2017). One of the most important and predisposing factors for the contamination of feedstuffs of farm animals and poultry is their moisture content (Kana et al., 2013; Abdallah et al., 2015). Although the presence of molds in foods does not always imply the harmful levels of aflatoxin, it may account for a significant risk. Aspergillus can colonize and contaminate food during the storage, especially following prolonged exposure to high humidity environment conditions (Mannaa et al., 2017; Reed et al., 2018). The risk of aflatoxin production is also higher in severe droughts, where soil moisture is below normal and temperature is high (Ostry et al., 2017). Codex Alimentarius Commission (CAC), the central part of the Joint FAO/WHO Food Standards Programme has determined the maximum levels of aflatoxins (B1, B2, G1, G2, and M1) in foodstuffs (Kotinagu et al., 2015). Recently, this commission has announced the maximum accepted/residue levels of aflatoxins in animal feeds as 0.02 mg/kg, that is 20 ppb in all feed materials and complementary feedstuffs for cattle, sheep, goats, pigs, and poultry; while it is 0.005 mg/kg in feeding stuffs for dairy animals and 0.01 mg/kg in complete feeding stuffs for calves and lambs (Bakırdere et al., 2012; EFSA Panel on Food Additives and Nutrient Sources added to Food, 2014; Hamed et al., 2017). High-performance liquid chromatography (HPLC) is a technique in analytical chemistry, which is used to separate, identify, and quantify aflatoxin in a mixture (Wacoo et al., 2014). Considering the dangerous effects of aflatoxins on the health of livestock, poultry, and subsequently, humans, it is important to measure the levels of aflatoxins B1, B2, G1, and G2, as well as total aflatoxin as critical health indicators in feedstuffs (Wu et al., 2008; Wu 2014). Accordingly, the main purposes of this study were to measure the aflatoxin levels using the HPLC in feedstuffs of three factories of Kermanshah province and to evaluate the effect of season on feed ingredients of livestock and poultry.

A: Sampling and Analytical Instrument

B: Chemicals and Method Validation

All the reagents were of HPLC standard grade. Standard aflatoxins were purchased from Sigma Chemical Company (Germany). They were diluted with methanol to different concentrations and used as a calibration standard. The stock standard solution of aflatoxins (a concentration of 10 mg/mL in methanol of each aflatoxin species) was prepared and wrapped in aluminum foil at -20°C. Then the aflatoxin standard mixture was prepared in methanol at 0.4 ng/mL for aflatoxins G1 and B1 and 0.08 ng/mL for aflatoxins G2 and B2. The analytical grade solvents were obtained from Merck (Sigma-Aldrich, Germany). The pure water used in the analysis was prepared by Micro Siemens water purification system using millipore filters (0.45 µ) (TDS, Chemistry Danshvar Co; Iran). PBS: Phosphate Buffer Saline (0.2 g potassium chloride, 0.2 g potassium dihydrogen phosphate, 1.16 g hydrogen; 8 g sodium chloride phosphate, and 900 mL deionized water at pH 7.4) was also used. Fifty grams of samples were weighted. Acetonitrile and methanol were at HPLC grade (Sigma-Aldrich,) and other solvents were up to analytical purity grade. The working solutions of aflatoxins were diluted in the same solvent and stored in glass-stoppered tubes at 0°C. The CH0-3817 column (5 µm C18 UG 120 A, LC column 250 x 4.6 mm) was used (Figure 1). Immunoaffinity columns (IAC) were also used for the purification of samples (China: Huaan Magnech Bio-Tech Co., Ltd.). 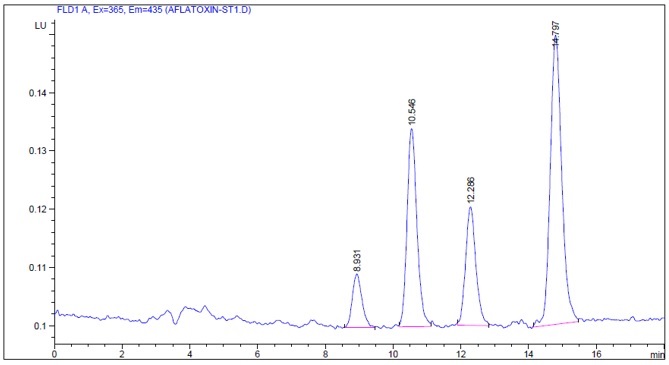 The method validation in terms of sensitivity and precision was performed according to the guidelines set by the International Union of Pure and Applied Chemistry (Yakubu et al., 2020).

The samples were ground evenly and kept in the refrigerator. The samples were kept away from other materials to avoid secondary contamination. The extraction of the samples was done as per the standard methods of analysis that ensure the safety and integrity of foods and other products impacting public health (AOAC international method) and was quantified with the reference standard of High-performance thin-layer chromatography (HPTLC). Aflatoxin analyses were performed using 50 g of each sample. For extractions, 200 mL of methanol 80% was used and the mixture was stirred for 3 min at high speed. Then each aliquot was passed through a filter paper, diluted in water, and filtered again using a glass microfiber filter. IACs were used to clean up the aflatoxin sample (AflaOchra). First, 10 mL phosphate buffer saline (PBS) was passed through each IAC. Then 70 mL of the filtrate was passed through the IAC at a flow rate of 1 drop/sec. The IAC was washed with 10 mL of water and dried by applying mild vacuum. Finally, the aflatoxins were eluted with 1.5 mL methanol and then with 1.5 mL pure water and were analyzed by HPLC. To do it, the samples (100 μL) were injected into the HPLC column and heated to 40ºC. The mobile phase was a mixture of water, methanol, and acetonitrile (60:30:20, v/v/v). For the mobile phase preparation, 120 mg of potassium bromide and 350 μL of 4 M nitric acid were added to one liter of the mixture. The aflatoxins were detected with an excitation wavelength of 365 nm and emission wavelength of 435 nm fluorescence intensity. In addition, analysis at the maximum permitted limits in feeds was done based on the guidelines of Iranian National Standard (maximum tolerated levels of mycotoxins in food and feed, ICS: 67.020. ISIRI. 5925, Amendment No. 1). The limit of detection (LOD) of aflatoxin mass fraction was 0.4 for B1 and G1, and 0.08 for B2 and G2. The quantification of separated aflatoxins was performed by comparing it with standard aflatoxins using the formula:

Data were analyzed according to the statistical method of a complete randomized block design (samples and seasons as blocks). Data were analyzed using the SPSS software version 23 (SPSS Inc., Chicago, IL., USA) with the general linear model (GLM) procedure. The statistical model of data analysis is as follows: Yijk = µ + Ti + Sj + eijk. Yijk: the values of each observation; µ: total average; Ti: the effect of treating (barley, corn, etc.); Sj: the season of the year; and eijk: residual effects. Comparisons between mean values were performed using Duncan's multiple range test (at 5% and 1% levels).

Table 1. Amount of aflatoxin B1, B2, G1& G2 by HPLC in raw material of livestock and poultry factories based on seasons and type of samples

*Comparisons between mean treatments were performed using Duncan's comparison (at 5% and 1% levels). There was no significant difference between positive and negative samples in terms of aflatoxins (B1, B2, G1, G2 and Total)

*** Based on ppb, the positive samples were mainly in cold seasons

Table 2. Number of tested samples and positive samples of raw materials of livestock and poultry factories of Kermanshah province based on seasons and type of samples

*Comparisons between mean treatments were performed using Duncan's comparison (at 5% and 1% levels). There was no significant difference between positive and negative samples in terms of aflatoxins (B1, B2, G1, G2 and Total)

*** Based on ppb, the positive samples were mainly in cold seasons.

Figures 2. Measurement and evaluation Aflatoxin B1, B2, G1& G2 in different samples by HPLC

*Comparisons between mean treatments were performed using Duncan's comparison (at 5% and 1% levels). No was significant difference between positive and negative samples in terms of aflatoxins (B1, B2, G1, G2 and Total)

Aflatoxins are dangerous toxins in livestock and poultry feed and can occur in different climatic conditions. HPLC assures good recovery and precision in the quantitative determination of aflatoxin extracted from livestock compound feed and feed ingredients. Our study showed that aflatoxin B1 contamination was present in the feed ingredients. No significant difference was observed for aflatoxins in the samples of animal feed in the factories of Kermanshah province, Iran. However, the aflatoxin B1 levels in animal concentrate feed were found higher during rainy seasons compared to the summer season. Therefore, continuous surveillance of aflatoxins is required in animal feeds to reduce animal and consequently human exposure. On the other hand, due to the various factors that affect the amount of aflatoxins in food, further studies are needed for identifying the source of contamination and executing control measures.

This research was related to the implementation of a student graduate project of Veterinary medicine with the No: 2547723, Date: 12.10. 2019, Faculty of Veterinary Medicine, Razi University, Iran. We also thank the experts from both the Veterinary and Medical Laboratory for helping us conduct the tests for this study.

Only the authors are responsible for the content of the paper.

This study was funded by the faculty of veterinary medicine, Razi University.

The authors declare that they have no conflict of interest.